Barberry bushes are an interesting and useful group of shrubs that are widely grown in gardens, mostly for their attractive leaf coloring, but also for their flowers and fruits, as well as for their hardiness, versatility and usefulness. They can be grown in a wide range of conditions and they are great plants to bring color and form to every garden, wherever you are, and whatever kind of garden you have. Many can also be easily grown in pots and planter boxes, so you don’t even need a garden at all to enjoy them on your terrace, patio or balcony, and they even make spectacular and easily-grown Bonsai trees.

However you choose to grow them, Barberry bushes are among the most useful and colorful plants for the garden, combining low-maintenance with high-impact, to give us great results wherever we grow them.

Using Barberry Bushes on Your Property 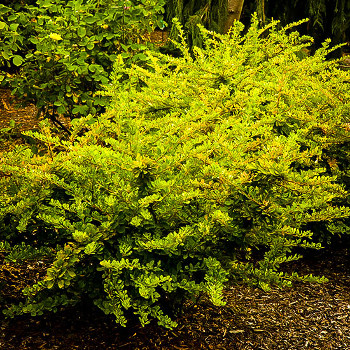 Although there are many kinds of Barberry bushes, only a small number are grown in gardens, but they are among the most useful plants we have. They combine toughness and low-maintenance with some of the most exciting and interesting foliage effects known. With leaves in solid colors of purple, red, pink and yellow, as well as forms with mixed colors on the leaves, plus dynamic fall shades of scarlet and orange, these great plants bring three seasons of color to the garden in permanent ways that flowering plants can never match.

It used to be that when we gardened we relied mostly on flowers for color, but these last no more than a couple of weeks, leaving us with a basically green bush for the rest of the year. Modern garden design, thanks to the hard work of plant breeders, has access to a whole range of plants with interesting foliage, from the blues of Spruce Trees, the reds of Japanese Maples, white and yellow from variegated foliage, and the many shades of Barberry bushes. With the help of these plants we can use color in a permanent way in the garden, so that through all the seasons we can have a splash of purple over here, and a sweep of gold over there, giving us much more permanently colorful gardens than we used to have.

You can use these plants as individuals in small gardens or as groups in larger ones, to fix strong areas of color in our designs. Planted among the foundation plants around our houses they are great color additions, and they don’t grow too tall, so they can safely be planted below windows without blocking the light and needing constant trimming. Remember when planting in groups to use odd numbers – 3, 5, 7, and so on – as this looks more natural and fits better into the garden.

Another popular use for these plants is for low hedges. These can be great ways to separate parts of your own garden for different purposes, or to mark a boundary with neighbors where you don’t need tall evergreens for privacy. Because they are naturally small, they don’t need a lot of clipping, and indeed they grow dense enough to make an informal hedge or privacy barrier without any clipping at all.

Some modern styles of garden use areas of stones, gravel and boulders, and Barberry bushes fit really well into spots like that, since the strong foliage colors stand out well against the paler grays or sand colors of stone. They also look great at the foot of stone walls. Because these are drought resistant plants they will be happy in these stony places and need no additional watering to thrive, even in hot sun.

You can also use Barberry bushes in planters and containers to bring long-term color to your terrace or patio, and they are great as centerpieces in big planters, surrounded by smaller plants and flowers to create a riot of cheerful color. They even make interesting, unusual and easy to grow Bonsai plants, and the bark is attractive in winter too.

Barberry bushes belong to the scientific group Berberis, and there are around 450 different species of these plants, growing naturally in most of the world, except for Australia. Most of the species are found in South America, Africa and Asia, but only a handful is typically grown in gardens. Some rarer species may be seen from time to time in Botanic gardens.

Appearance of the Barberry Bush

Berberis is a large group, but most of these plants have lots of common features, as well as interesting differences. They are all shrubs, not trees, and most of them are quite small, with the smallest perhaps 3 feet in height, and the largest species around 15 feet tall. Those that grow in colder areas are deciduous – they lose their leaves in winter – but in warmer countries there are many that are evergreen, and if you live in a warmer state you may find some of this type grown locally.

One very interesting feature is that the branches are actually of two kinds, although this may not be immediately obvious. There are the long branches that make up the plant, but the leaves you see on them are actually tiny side-branches, very short, carrying a cluster of leaves. The leaves of the long branches are turned into spines, so that you will see a spine at the base of each leaf cluster. Some people don’t like Barberry bushes because of these spines, but they do make the plants deer-resistant and good for keeping out four and two-legged intruders from your property.

The flowers of Barberry bushes are usually yellow or orange, and produced in clusters. Although small, a profusion of them can make a bush look very attractive during the flowering season. The flowers are followed by small berries, usually red but sometimes dark blue in color.

There is a wild European species of Barberry, Berberis vulgaris, which used to be grown widely, but is not grown much any longer, indeed it is banned in countries like Canada, because it carries the deadly disease called Wheat Rust, which can destroy wheat crops and the livelihood of farmers. For that reason most of the Barberry bushes grown are forms of the Japanese Barberry (Berberis thunbergii), named after a famous botanist and plant collector called Carl Peter Thunberg, who spent a lot of time in Japan, where he discovered this plant and many others. This species does not carry Wheat Rust.

The Japanese Barberry was introduced into America in 1875, from seeds send from gardens in Russia. It was first grown at the famous Arnold Arboretum in Boston, where it proved popular as a replacement for the European Barberry, and became widely grown across much of the north-eastern states.

The wild Japanese Barberry has green leaves, and in the early years it was grown mostly for its flowers and for the berries, which were used for preserves, giving a taste that today we would get from using lemon peel. In 1913 a purple –leafed form was discovered in Orleans in France, at the Renault Nursery. This form, Berberis thunbergii var. atropurpurea, became very popular and was widely grown, but it has been largely replaced by a more compact version, the Crimson Pygmy Japanese Barberry, more suitable for modern gardens.

Numerous other color forms and variations have also been developed, including a very striking golden-yellow form, called the Dwarf Golden Japanese Barberry. This plant was developed in turn form a larger yellow form found in an American nursery in the 1950’s. All these various color forms of the Japanese barberry account for most of the plants grown in gardens, although other species may be available from time to time, each with their own very worthwhile features.

Not only are Barberry bushes useful, they are also very easy to grow. They will grow from USDA hardiness zone 4 to zone 7 or 8, so in most parts of the country they are perfectly hardy, surviving down to minus 30 degrees Fahrenheit. This makes them really useful for gardeners in cold areas, but they also thrive in much hotter states and are drought-resistant, except under extreme conditions.

Most do best in full sun, although they will also grow in light shade. They will grow in almost any kind of soil, from very sandy soils to heavy clay soils, and although they will tolerate periods of wet, they will not grow in soils that are boggy and constantly wet. They do not have any serious pests and diseases, those spines keep deer away, and these are the easiest of plants to grow. You certainly don’t need that ‘green thumb’ to grow Barberry bushes, and you don’t need to do any work to grow them – even the small leaves just disappear into the soil and don’t need raking up.

Barberry Bushes and the Environment

In recent years there has been some concern about growing Barberry bushes, since in some areas (especially in the north-east where this plant has been grown for the longest time), plants now grow in the wild. Birds love the berries of Barberry, and that is how the seeds were spread. They usually grow in disturbed areas, like abandoned fields, and along highways and ditches, but in some areas they have spread into natural woodlands.

Because of this some people think we should not grow the Japanese Barberry in our gardens – but fortunately, studies have been done and they show that the most popular colored forms, like the Crimson Pygmy and Dwarf Golden forms, produce few (if any) seeds, and any seedlings that do grow are weak and usually die.

Although we cannot do anything about the plants already growing in the wild, growing these ‘safe’ forms in our gardens certainly won’t make the problem any worse. By using genetic testing professional growers make sure they are truly growing these harmless forms, so gardeners can rest assured that they are not harming their local environment by growing these beautiful plants in their gardens.

thetreecenter.com has a Shopper Approved rating of 4.8/5 based on 27707 ratings and reviews