Flowering shrubs are an essential part of any garden’s ‘plant furniture’ and bring lots of color into our lives. Many flower in spring, so it is pretty easy to have a colorful garden at that time, but as the season goes on we can find ourselves with a green garden, lacking the excitement of flowers. This is where Hydrangeas step in, bringing color and interest in summer and into fall with their large, long-lasting heads of flowers in a wide range of colors.

Not only do they bring this late bloom, but they are shade-tolerant too, so they can brighten the darker, shadier parts of the garden. There are several different types of Hydrangeas, suitable for different climates and garden locations and without them our summer gardens would be pretty drab and uninteresting.

Using Hydrangeas on Your Property

Hydrangeas typically grow three to eight feet tall, so they work well to produce flowers right near eye-level and they are a suitable size for even the smallest garden. When not in flower they have large, attractive leaves that make a gentle background. Shady areas underneath shade trees or on the north of your house are ideal spots for Hydrangeas, but many will also grow in sunny areas too.

In more northern regions they will generally do better with some sun for at least part of the day. If you have, or are planning, a garden with Azaleas and Camellias, then Hydrangeas are great additions, since they enjoy similar growing conditions. Because they flower later they provide flower interest when your other plants have finished blooming. So for a shade garden these are ideal plants to use. In any shady corner, a Hydrangea is always the first flowering shrub to think of using.

Perhaps you have a shady walkway alongside your house – if you do then a row of Hydrangeas makes a spectacular display running alongside it. Often in gardens there are narrower areas between walks and fences or buildings, and if you have such a space, a row of Hydrangeas is a wonderful way to fill it. You can use a single color, or mix colors together.

Some of the larger varieties, like the Panicle Hydrangea, make great specimen shrubs planted in the lawn, in a planting hole in a patio, or even in a large pot. With their huge pointed flower-heads they make a wonderful show. Our most popular (by far) of the Panicle Hydrangeas would be either the Limelight Hydrangea which is larger and the Little Lime Hydrangea which doesn’t get quite as tall. This type are also good shrubs to plant behind smaller bushes, or behind beds of summer bedding plants, like Impatiens or Begonias. 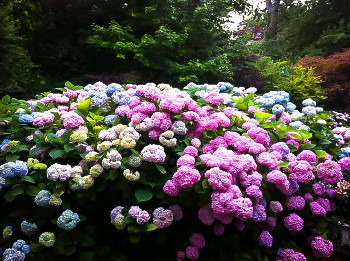 Hydrangeas are deciduous shrubs with twiggy branches that form rounded plants between three and eight feet tall. Some kinds can be grown on a single trunk, but usually they have many stems coming from the ground. The leaves are large (about eight inches long), simple oval shapes and usually they have small, soft ‘teeth’ along the edges. The leaves are smooth and soft, in a light shade of green. Some show a little color in fall, but mostly they turn brown before falling for the winter period. The bark is light brown and peels off as it gets older, keeping the stems fresh and clean.

It is the flowers that are the main glory of hydrangeas. Most wild hydrangeas have bunches of small, fluffy flowers with a ring of larger flowers around the outside, looking a bit like a crown. The small ones produce seeds and the large ones don’t – they are there to attract insects. Gardeners have for many, many years, chosen plants that have more of these large outside flowers, called sterile florets, so that today the flowers heads are almost entirely made of them, making a big head of flowers like a colorful ball or a fat pyramid.

These flower head can be 12 inches across and they develop at the ends of the stems. Not only are they colorful, in shades of reds, pinks, blues and white, but they last and last, since they can’t produce seeds. Even when they fade they turn attractive tones of pink, red, buff and tan, so that many gardeners cut them and let them dry to use as winter decoration in the house.

Varieties and Types of Hydrangeas

What kinds of Hydrangeas you choose to grow depends on where you live. There are types that will grow well in zone 3 and others that do best in zone 6 and warmer regions.

The Mop-head Hydrangeas, which come in blues and pinks, can be grown from zone 6 all the way into zone 9. These are forms of the Chinese Hydrangea, Hydrangea macrophylla. These have been selected for centuries to develop large, rounded heads entirely of sterile florets and they come in many colors, from red and pink to blue and white. They grow three to five feet tall, depending on the variety, where you live and how you prune them.

An amazing thing about these plants is that the color of the flower changes depending on the soil. So a Mop-head Hydrangea like the Perfection Hydrangea will have stunning rich-pink flowers in most soils, but if you have acid soil it will bloom with beautiful deep-blue flowers. These plants also come in white, which is a great color to brighten a shady spot, so the Peace Hydrangea has huge balls of dense, pure-white flowers.

Modern Hydrangeas like these have strong flower-stems which stay upright, not like older varieties that often bend over and look a lot less attractive. These kinds of Hydrangeas start flowering in early summer or even late spring and continue to produce flowers right to the end of summer. For warm areas you cannot find a better flowering shrub for long blooming.

If you live in colder areas it used to be impossible to grow this type of hydrangea, but now there is even one, the Endless Summer Hydrangea, which will grow in zones 4 and 5. It is covered in pink or blue flowers all summer long and really makes a wonderful show in colder gardens.

If you like hydrangeas with big, round heads, but you live in colder regions, then the Annabelle Hydrangea (Hydrangea arborescens), which looks just like a white Mop-head Hydrangea, is a perfect choice, since it is very hardy and will happily grow right down into zone 3. With its huge white balls starting in late summer, it makes a wonderful display. The flower heads start a bright green, soon turn white, last for weeks and then turn lovely shades of pink and red as the cold weather of fall arrives.

A quite different kind of plant is the Panicle Hydrangea. Not only are these plants much hardier, growing well from zone 3 to zone 8, they will grow taller, with some reaching as much as 15 feet, but most being around 6 feet tall. They enjoy more sun than the Mop-head Hydrangeas, so they are a good choice for a sunnier location. This Hydrangea comes from China and Japan and has also been selected for large flowers.

It is also called the Peegee Hydrangea, after its Latin name, Hydrangea paniculata var. grandiflora. Some varieties, like the Fire & Ice Hydrangea and the Sunday Fraise Hydrangea turn pink and red by late summer, so they bring early color to the garden. For a larger shrub, grow the Tardiva Hydrangea, which forms a spectacular upright shrub to as much as 15 feet, with very large pointed flower bunches at the ends of all the branches

The Oakleaf Hydrangea (Hydrangea quercifolia) is hardy from zone 5 to zone 9, so it can be widely grown. This is a wild American plant from the South, but this beautiful Hydrangea is less well-known and it should certainly be planted a lot more, especially now that there is a beautiful red-flowering form, the Ruby Slippers Hydrangea. It has beautiful leaves that are lobes like giant oak leaves and they turn vibrant rich red colors in fall. Ruby Slippers is a nice compact three to four foot tall plant, although other forms can grow five or six feet tall. 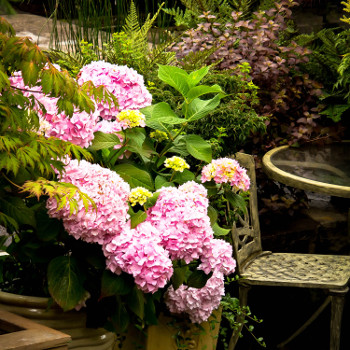 Most Hydrangeas should be planted 3 feet apart, alone, in a group, or to make an informal hedge in your garden. So dig a hole or a trench, two or three times wider than the pot and add plenty of organic material, like peat-moss, compost, rotted leaves or rotted manure to the soil.

Place your plants in the hole or trench, replace most of the soil and firm it well down. Then water thoroughly and when the water has drained away replace the rest of the soil, being careful not to cover the roots with any extra soil. Keep well watered and apply mulch each spring to retain moisture.

Hydrangeas need plenty of water during the growing season, so make sure you water them well during any dry periods. Mop-head Hydrangeas especially need lots of water to do well. Mulch your plants with rich organic mulch every spring, to conserve water and also to feed your plants.

Pruning Mop-head hydrangeas consists of removing old flower stems low down where younger ones are shooting out and removing the tips of young shoots to encourage side branches and more flowers. Don’t prune too much as these plants flower on the stems grown the year before.

The Annabelle Hydrangea flowers on new shoots, so it can be pruned hard in spring to keep it lower and bushier. The Oak leaf Hydrangea should just have any dead or crowded shoots removed and be pruned a little for neatness. It doesn’t really need much pruning at all.

Panicle Hydrangeas need quite different pruning. They can be pruned hard in late winter or early spring, as the flowers form on the ends of the new shoots. Hard pruning will keep the plant smaller and also encourage larger flower heads. Cut the shoots that grew in the previous year back to a few inches from the main branches, unless you want to keep a branch to get a larger plant.

Add Color and Interest to Your Garden!

All the different kinds of Hydrangeas make great additions to the garden, especially for color and interest in shady areas and for flowers in late summer and into fall. As long as they are given enough water they are trouble-free plants that make a spectacular display as a hedge or as single specimens, flowering year after year with little care needed. 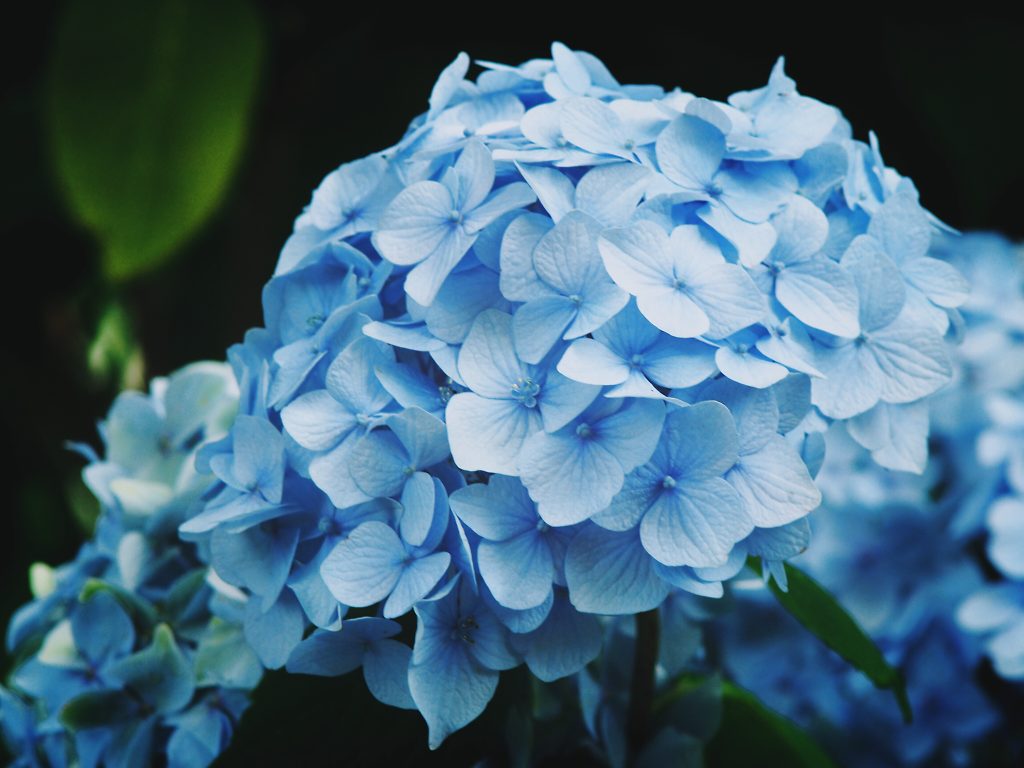 Planting Guides
How to Plant Hydrangeas

Hydrangeas are among the most popular plants for shady parts of the garden. They flower late, after many other plants are finished blooming, they last for weeks and weeks in bloom, slowly changing…