Plums are a delicious fruit than can be enjoyed fresh or cooked into pies, crumbles and jams.They can even be dried so that you can have your own prunes the whole year round. The trees make a great addition to the garden and are both attractive small trees and useful producers of a delicious fruit crop. They are smaller and easier to grow than most other fruit trees, so they make a natural choice for a gardener who wants to have their own fruit but does not have the time for the work involved with some other more demanding fruit trees.

Using Plum Trees on Your Property

Plum Trees are small to medium sized trees that grow 10 to 20 feet tall depending on the roots they are grown on. They can be used as small shade trees, background trees planted among other flowering trees and shrubs, or planted in a row to make a screen that will be not only be attractive, but will be useful for the fruit it produces.

If you are planting a collection of fruit trees for the fun and profit that comes from growing your own fruit, then Plum Trees belong in every fruit tree collection. Since they will grow well in zones 5 and sometimes in zone 4, they are especially useful for gardeners in cooler areas that will not support the more exotic fruits. The Superior Plum Tree is an especially good variety for cooler gardens as it is hardy throughout zone 4, unlike some other, more cold-susceptible varieties. 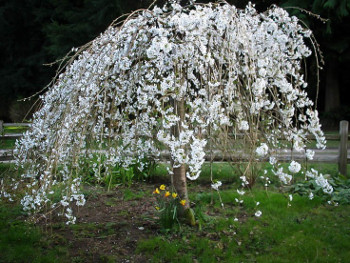 A Plum Tree is a small to medium-sized tree related to the flowering cherries that are such a beautiful feature of spring gardens. Although not as showy, Plum Trees do have small white flowers in spring that produce the plums. The leaves are long with fine teeth along the edge and the bark is a warm brown color which becomes darker and ridged as the tree matures.

Plum fruits have skin which can be dark purple to rich red, depending on the variety. Most varieties have a thin grey waxy film over the skin, called bloom, which prevents the fruit from drying out before it has ripened. The flesh of plums is either yellow or red and of course the stone in the center contains the seed. Growing plums from these stones takes many years and the resulting tree will usually be inferior to the parent, so it is much better to buy a tree of the variety you want than to try to grow your own. Plums will usually ripen in August when there tangy sweetness is most refreshing.

There are two main types of Plum Trees grown in America. The European Plum (Prunus domestica) is commonly grown in Britain and Europe. However, it is a little particular about where it grows and doesn’t grow well in areas that are too warm or too cold for it. It only does well in parts of the east and some parts of the Northwest.

The Japanese Plum (Prunus salicina) was taken by the famous American plant breeder Luther Burbank and developed into varieties that would grow in warmer regions, like California. This plum originated in China but was widely grown in Japan and it was from there that it was introduced into America in the 19th century. Burbank created many new varieties of food crops suitable for growing in California and helped create the modern food-growing industry.

Because the European Plum found California too warm, Burbank developed Japanese Plum varieties that grew well in warmer conditions. His most famous, the Santa Rosa Plum, was bred over a hundred years ago and is still the most widely grown variety in California and therefore the most common in stores. Japanese Plums are popular for their large size and sweet flesh and are generally preferred wherever they can be grown.

To enjoy the great features of Japanese Plums in cooler growing areas, some of them have been crossed with the American Plum (Prunus americana), which grows wild throughout the Northeast and was eaten by native Americans. From these crosses several varieties of plums have been produced, and one that is especially useful is the Superior Plum Tree, which will grow well in zone 4, while most Japanese Plums prefer zone 5 or warmer. This means that gardeners in cooler areas can now enjoy the superior quality of Japanese Plums which was previously only possible in warmer regions. Of course, this plum will also grow well in warmer regions so it is an excellent choice for gardeners across almost all of America.

European Plum varieties grow in zones 4 to 8, but do best in the middle range of zones 5 to 7, where they are not likely to have their flowers damaged by a late frost, and will also have enough cold days in winter to develop well. Japanese Plums grow in zones 6 to 9, which is why they do well in California. They flower two weeks before European Plums and so are susceptible to damage by late frosts in cooler zones. The hybrid Japanese Plums like the Superior Plum Tree grow in zones 4 to 8, so they are an excellent choice for all but the warmest parts of the country.

Plums do best in slightly sandy soils, but they are quite happy to grow in almost any kind of soil that does not stay too wet. If you have a lot of clay in your soil, plant your Plum Trees in higher areas, not in the lowest points where water tends to accumulate and stay. Although they do not like wet soil, they may need some watering during dry times to prevent the developing fruit from falling.

Prepare the soil for your Plum Tree by digging a good amount of organic material into the soil. This could be compost you have made in your garden, or well-rotted farm manure, both of which will give good results. Plum trees are grown by grafting the variety wanted onto a special plum that just makes the root system. These grafted trees can be of different sizes depending on the roots chosen. So dwarf trees will reach 8 to 10 feet tall and the same across, while standard-sized trees will be twice as big. Dwarf trees should be planted around 8 feet apart, and standard trees 18 feet apart.

Dig a hole twice the width of the pot and after you have placed the tree in the hole, put back most of the soil and firm it down around the tree. Add plenty of water and when it has drained away put back the rest of the soil. Make sure the tree is no deeper than it was in its pot and if you have a clay soil plant the tree on a low mound, perhaps 6 inches above the main level of the ground. Water your new tree every week during the first season while its spreads out into the surrounding soil.

Plum trees require pruning to get the maximum crop. A vase shape is a very popular way to prune a Plum Tree, with several branches growing up at an angle and the center of the tree empty of branches. This allows plenty of light into the tree to make sure the fruit ripens properly. When they are young, prune your trees in spring just before flowering. When the trees are mature they should be pruned in summer.

For the initial pruning of your young tree, cut the tip off the tallest shoots and choose three or four branches to make the framework. Remove all the other branches. If the growth is too vertical, cut the shoots back to an outward-facing bud, which will then grow outwards and make the tree wider. After a couple of years when your main branches are larger, remove everything from the center of the tree to create the vase shape. Once the tree is mature, the only pruning needed is to cut off any shoots that come from the trunk or the lower parts of the main limbs, and to shorten back new growth.

As the fruit develops you may have too much fruit for your tree to carry, which will mean the fruit will be very small without a lot of flesh. So it is best to thin the fruits when they are small so that they are about 3 inches apart. This will give you the best fruit size.

Water your tree whenever the soil becomes dry. Water thoroughly and water where the limit of the branches is, not close to the trunk, as the feeding roots are just beyond the area of the tree beneath the branches.

Plums are one of the easier tree fruits to grow and modern varieties are much more disease-resistant than older ones were. With some simple care and pruning you can quickly learn to take good care of your Plum Tree and have a great crop of delicious plums. If you are not sure which variety to grow, the Superior Plum Tree is a great all-round tree that will grow in many different areas of the country and produce a crop of an excellent quality and taste.