Boxwood Shrubs first arrived in the United States in the mid-1600s, and the genus has species all over the world, primarily in tropical or subtropical climates. Some species are cold-hardy, and many are considered slow-growing. These evergreens, specifically the English Boxwood, were once poplar for being easily manipulated into a variety of shapes, such as squares and globes.

Today, other varieties of the Boxwood family have made their way into many American gardens as hedges, both large and small, as well as border and ornamental plants. The Boxus genus has about 70 species. Commonly called box in many parts of the world, North American gardeners uniquely refer to the species within the genus as boxwoods.

Not every plant works for every garden. That is why it is essential for any gardening endeavor to be preempted by adequate research. Boxwood Shrubs are popular throughout much of the United States, and they are hardy in USDA Hardiness Zones 5 through 9, though many gardeners choose to grow them in containers. Boxwoods are rather adaptive to poor soils and mild droughts.

How to Buy Boxwood Trees

Boxwood Shrubs require specific and well-informed care during the initial stages of growth. Buying Boxwood Shrubs is an investment. First, it is important to determine if the plant grows well in the given planting location. If this is the case, buying a successful Boxwood Shrub from a reputable arborist, such as The Tree Center, is essential to later success. Visit The Tree Center online to buy a healthy Boxwood Shrub.

How to Plant Boxwood Shrubs

Water: Water immediately after planting and once or twice a week in lieu of rain, especially in summer. After the first season, they will not need as much watering.

When to Plant: Plant in mid-fall, though early spring can also be successful. 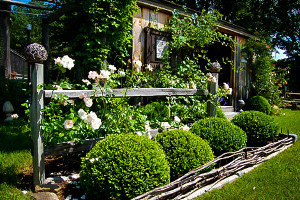 Second, after the shrub arrives it is important to inspect and loosen the dirt surrounding the root ball. The root ball, or the collection of roots at the base of the Boxwood Shrub, is essential in determining the size of the hole to be dug. In general, the hole into which any young plant is inserted should be twice or three times as wide as the root ball. This is especially true of Boxwood Shrubs, which have short roots that extend out laterally along the ground.

Finally, if using fertilizer, add it in the early spring planting or gardening cycle. Water the tree immediately after mulching.

Soil is fundamental to the overall success of any shrub or tree. Soil is composed of differently sized particles, and the sizes of these grains determine the type of soil. There are three main categories of soil, though others are known to exist. The three main categories are: clay, silt, and sand. Sand is made of large sized particles. These transfer air and water too quickly through the soil, often ending up in the failure of the Boxwood Shrub to absorb needed resources.

On the other hand, clay and silty soils are made up of smaller particles. These will often stop the movement of air and water through the soil. This is especially detrimental to Boxwoods, as the short roots of the plant can quickly drown in standing water. Boxwood Shrubs prefer loamy soils, which are made up of a variety soil particle sizes, thus combining the benefits of all soil types. Drainage is important to the Boxwood. If the soil in the planting location is made of clay or sand, it is best to compost the soil prior to planting the Boxwood. Do this by uprooting the soil and adding compost to the tilled soil.

The pH of the soil is also important to consider when planting Boxwoods. Although Boxwood Shrubs are somewhat adaptive to various soils, they prefer a pH between 6.5 and 7.5.

Boxwood Shrubs require moderate watering. It is important to water the Boxwood Shrub immediately after planting, as this is when the shrub is most vulnerable. During the first season, water the Boxwood once or twice a week. This especially important during summer and dry spells. In the second season, once a week will be sufficient. After the first two seasons, natural rainfall should be satisfactory. Continue to monitor the Boxwood for over- or under-watering.

Boxwood Shrubs have small, lateral roots that can suffer from root rot if water does not drain properly. For this reason, many landscapers choose to plant Boxwood Shrubs in containers if the area is riddled with poor soil.

Using mulch and fertilizer can help increase the overall success of a Boxwood Shrub. Mulch is especially beneficial. Mulch helps in conserving water and distributing water to the Boxwood’s root systems gradually. If soil is somewhat poor, mulch can help compensate for moderate drainage issues. Organic mulches or composts are suggested, and these should be placed in a two to three inch layer in a three foot radius around the base of the Boxwood. It is best to re-mulch once or twice during a growing season.

Fertilizers are not generally needed when growing Boxwoods. If fertilizers are determined to be needed, consider granular fertilizers with a 10-6-4 ratio, urea based. The number sequence refers to the ratio of nitrogen, phosphorus, and potassium, respectively. Fertilize in the early spring.

Boxwoods have been cultivated for centuries, and these shrubs are considered to be some of the oldest privacy screens. Boxwood Shrubs are also valued for their wood, which is fine-grained. Items such as wood-cuts, boxes, wooden combs, chess pieces, and wooden spoons have all been made from Boxwood.

Furthermore, many instruments have elements made from Boxwood, such as the bridge of a violin or the reeds for woodwinds. In fact, the Great Highland Bagpipe’s wooden parts were once made exclusively from Boxwood.

All varieties of Boxwood are primarily used for garden borders or ornamental plants, though they also do well when planted in pots around front doorways. Many landscapers choose to plant Boxwoods around colorful accent trees, where their evergreen qualities helps to frame the art of the garden.

The English Boxwood was once the only Boxwood planted in the United States, before other cultivars were developed for a variety of reasons. This slow-growing Boxwood is easy to shape, and although pruning is minimally necessary, many landscapers choose to carefully prune to earn a desired shape. The English Boxwood reaches between 2 and 4 feet, and it makes an excellent short hedge for garden borders.

The slow-growing Wintergreen Boxwood grows well in USDA Hardiness Zones 5 through 8, where its cold-hardy properties make it a popular choice. This compact Boxwood does well as a rounded accent evergreen in the garden, reaching between 2 and 4 feet. The Wintergreen Boxwood is also resistant to most pests, diseases, and droughts.

This Boxwood Shrub, hardy in USDA Hardiness Zones 5 through 8, is unique in its particular shade of green, which when layered against its own backdrop appears to be velvet in texture. The Green Velvet Boxwood reaches between 4 and 6 feet and requires minimal pruning.

Boxwood Shrubs are frequently planted as ornamental borders for gardens, and they often frame colorful accent trees. The American Boxwood is prized as a hedge tree. Boxwoods are also relatively drought-resistant and do not have many pests. They are also resistant to deer.

Boxwood Shrubs do have soil concerns. The soil must be well-draining, as the short roots of the shrub will drown in standing water. This also leads to root rot. Additionally, the deadly Boxwood blight affects many Boxwoods, caused by a fungus. As recently as 2012, the Boxwood blight was identified in Connecticut, North Carolina, Virginia, Rhode Island, Massachusetts, Ohio, Oregon, Pennsylvania, and New York. It presents as spotted leaves and will eventually kill the plant. Buying your Boxwood Shrub from a reputable arborist, such as The Tree Center, is the best defense, as is separating young saplings from other Boxwoods. 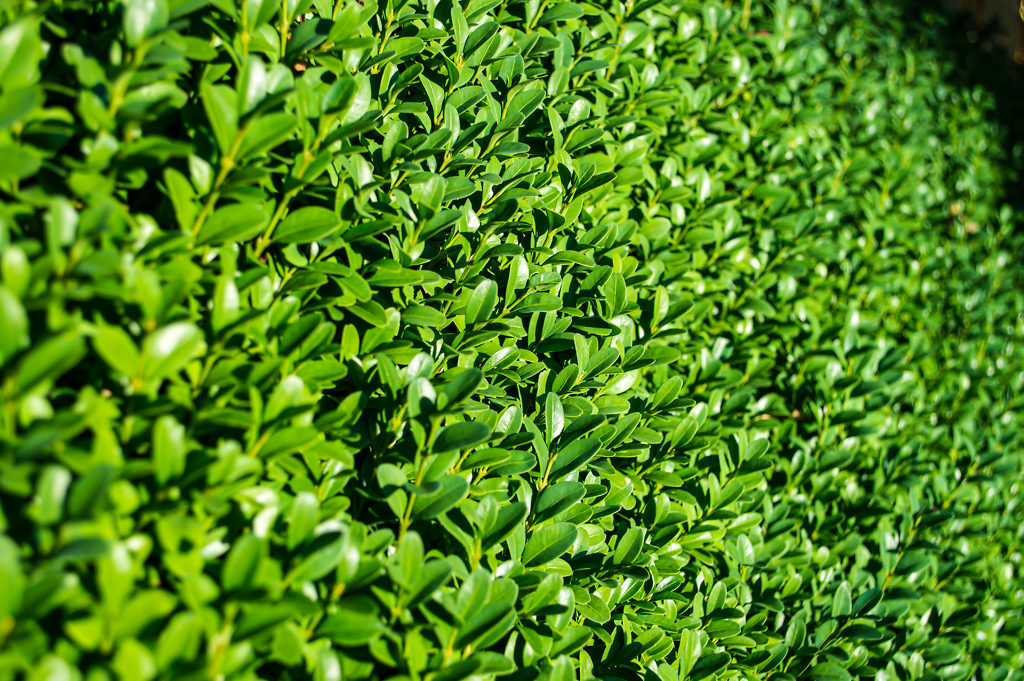 Planting Guides
How to Plant Boxwoods

Boxwood bushes are great plants for making small or medium-sized hedges and also as specimens in the garden. They are often used as part of the planting around the house, as they can… 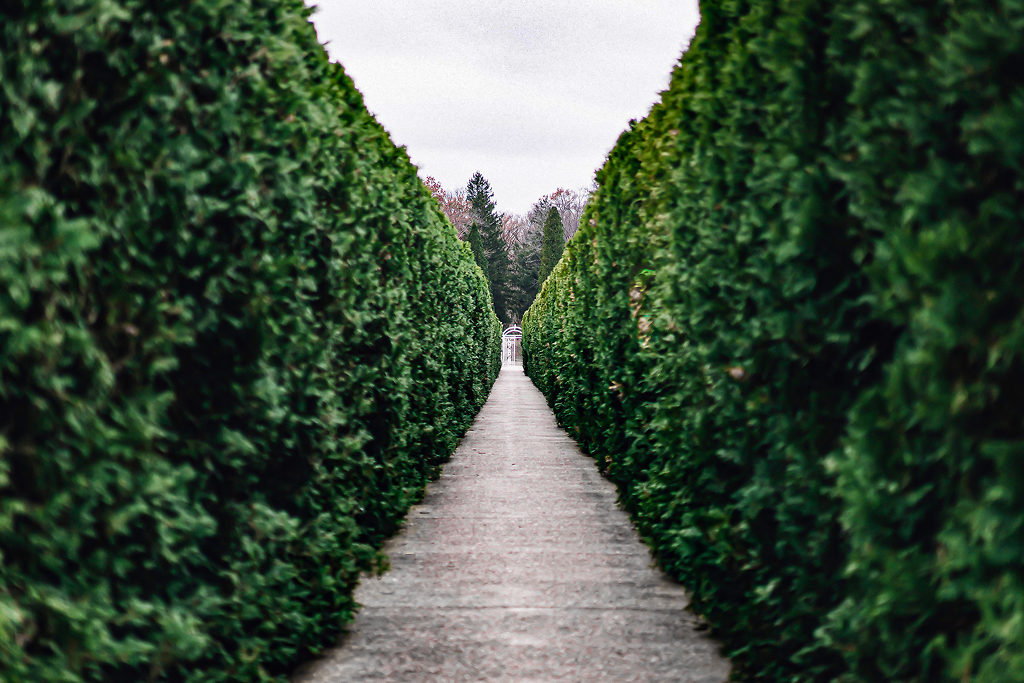 Hedges are one of the major features of many gardens. Besides providing privacy and protection for your garden, they make the perfect backdrop for ornamental and flowering shrubs and plants. The plants you…