Every garden, and especially older, more established ones, have areas that are difficult for plants to grow in. These are often dark places beneath large trees, where the soil is full of roots, and where in summer the soil is always dry and dusty. As trees grow, they inevitably spread out, competing for light and water, and crowding out plants beneath them. Sometimes it is a narrow area between buildings, where the sun never reaches, or an urban garden, surrounded by buildings and trees. Gardeners spend a lot of time trying to clothe these spaces with plants, and often failing, until perhaps they give up, and resign themselves to blank spaces, with just the trunks of tall trees and bare ground to look at. When faced with areas like this, and perhaps after failing even with shrubs generally found to be reliable in shade, the wise gardener turns to Aucuba Plants.

These plants, sometimes called spotted laurel, and whose name comes from the Japanese word “Aokiba”, are certainly the plant of last resort, when others have failed, but really, they deserve much more. How many other plants give so much, and ask so little? Their large, green or more often gold-splashed, leaves shine out of the darkest corner, and some produce attractive, if quiet, blooms, and clusters of showy bright red berries too. Since they grow just as easily in better conditions, with better soil and more light, it is time to bring them more to the foreground of our gardens, not just the worst corners, and appreciate their low-maintenance appeal, and their striking foliage.

Aucuba Plants are mostly medium-sized evergreen shrubs, with large, leathery and glossy leaves, 8 inches or longer, with coarse teeth on the upper half of the leaf. The shrub has many stout branches, usually green when young, and turning brown as they mature. Although plants with plain green leaves are sometimes grown, most plants in gardens have striking irregular patterns of gold spots and splashes on them, giving these plants a unique look. Most will grow between 6 and 10 feet tall, but sometimes they can grow to 15 feet. They are usually as broad or broader as they are tall, making substantial plants that can fill large and difficult spaces in the garden.

The Aucuba Plant has separate male and female trees, with different flowers. Male flowers grow in clusters at the end of the branches, with between 10 and 30 flowers in a group up to 5 inches tall. Each flower is small, with four purplish-brown petals. Flowering is interesting rather than spectacular. Female flowers are in smaller clusters, in the axils of the leaves, where the leaf joins the stem. Flowering occurs in spring, and if a female flower is pollinated it develops into a berry about ½ inch across, containing one seed. In late fall, or even in late winter, the clusters of berries turn bright red. Most birds ignore the berries, so they last and last for weeks, before eventually turning dark and falling from the tree.

Using Aucuba Plants in Your Garden 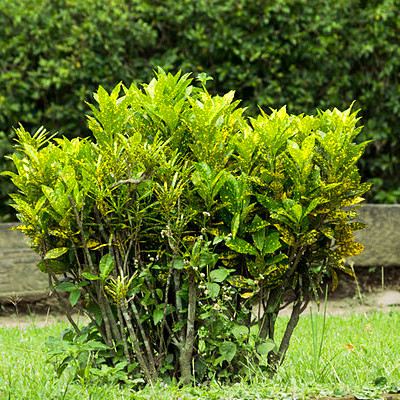 Aucuba Plants are the perfect choice to fill the darkest and driest parts of your garden with foliage and interest. They will seemingly grow where nothing else will, tolerating very poor soil, urban pollution, drought and deep shade. They are obvious choices for those kinds of areas, and there they shine, bringing brightness and bold foliage to the most problematic spots. They can be used alone as specimens, or in groups or rows to fill larger spaces. They make excellent background plants for other shrubs and small trees, informal hedges and screens, and they can be easily trimmed to control their size and shape.

Aucuba Plants also grow well in pots and planters, and if they don’t get regular watering and care, they survive anyway. They can be used to fill corners of courtyards and patios, and in colder areas plants in containers can be brought indoors in winter and kept outdoors for the rest of the year. They even make good houseplants for dark, cool rooms and hallways.

Growing and Caring for Aucuba Plants

Aucuba Plants grow well in zones 7, 8 and 9, without any damage in winter. Since they can tolerate temperatures as low as minus 5 degrees Fahrenheit, they will also grow in sheltered parts of zone 6, and even if some winter damage occurs, they quickly recover with the return of warmer weather. When grown indoors they do best in lower temperatures, in the 50 to 65-degree range.

Aucuba Plants will grow in sun, partial shade or full shade. Particularly in zones 8 and 9, or in any hot location, the leaves can burn in the sun, so shade from at least afternoon sun is best. Since they tolerate full shade better than just about any other plant, they are ideal for those places, leaving brighter spots to other plants. However, if you want very tough and low-maintenance plants for partially shaded areas, they are great choices.

Almost any soil is acceptable for Aucuba Plants, even soils that are low in nutrients, such as those areas beneath mature trees where the trees have taken many of the nutrients from the soil. They tolerate soils that are dry for long periods too, although younger plants should be watered if you see the leaves wilting and drooping.

Moister soils are fine too, but very wet soils are not suitable, as the roots can rot. Like any plant, it pays to improve the soil in the planting area, and young plants will grow better with a mulch of rich organic material placed beneath them in spring. New plants will benefit from some evergreen fertilizer, which will encourage more rapid growth, and watering new plants regularly is always a good idea.

If you grow female varieties of Aucuba Plants, then for berries you need a male too. So try to have at least one male plant for every six female plants, and you will be rewarded with bright red berries, as well as those beautiful golden leaves.

Aucuba Plants rarely suffer from any pests or diseases, but deer can and do sometimes eat them. Left alone most plants will naturally form dense shrubs, but if you need to trim to control the size, or to encourage a broader, lower plant, then late winter or early spring, before the new shoots appear, is the best time. Because the leaves are large it is best to trim with pruners, rather than shears or hedge trimmers. Cut back a branch to just above a leaf or the place where a leaf was attached, and new shoots will soon emerge, making a denser, bushier plant.

History and Origins of the Aucuba

Aucuba Plants grow naturally in eastern Asia, all the way from the Himalaya mountains to China, Korea, and Japan. Wild plants have completely green leaves, but forms with spotted leaves have been grown in Chinese and Japanese gardens for centuries. The first plant was brought to Europe by the German botanist and nurseryman John Graeffer, in 1783. That first plant was the still very popular yellow-spotted variety, ‘Variegata’, and it was at first grown as a greenhouse plant. It was a female tree, but because there were no male plants it did not produce proper fruit.

Only in the period from 1856 to 1866, when Japan was being opened up to trade, were more plants introduced, many with plain green leaves, but some were male, so fruit was finally seen in 1864 on a plant sent to England by the famous plant hunter Robert Fortune. The equally famous Philipp Franz von Siebold, an expert on Japanese plants, introduced more into Europe. At the same time many Japanese plants were flooding into America, and Aucuba Plants – known as ‘Gold Plants’ at that time – would definitely have been among them.

Although today botanists recognize 13 different species of the genus Aucuba, only three are generally grown, and of these only one, in numerous varieties, is seen in most gardens, or as houseplants.

Almost all Aucuba Plants grown in gardens are varieties of this species, native to China and Korea as well as Japan. It grows in forests, along streams and in gorges, and among rocks. Wild plants have plain green leaves, while all garden plants show some improvement over the wild version, usually the unique style of golden-yellow spotting and splashing that makes these plants instantly recognizable.

The most widely grown forms of this plant are:

‘Variegata’ – The Gold Dust Aucuba Plant is the original form introduced from Japan in 1783. It has leaves completely covered in irregular spots of yellow-gold, and it grows into a bush at least 6 feet tall and wide, becoming larger in time. This is a female plant, and if pollinated it will produce red berries.

‘Crotonifolia’ – This variety is very similar to ‘Variegata’, but the golden spots are larger.

‘Maculata’ – This variety is the male equivalent of ‘Variegata’, and therefore it is very similar in appearance, but without berries.

‘Rozannie’ – A plain leaf plant that is unusual for having both male and female flowers, and so able to fruit by itself, or pollinate other female trees around it.

‘Sulphurea Marginata’ – This plant is very different looking, with a broad, irregular band of yellow around the leaf, and a green center.

Aucuba Plants are certainly a top choice for those very difficult spots in the garden, where dryness and deep shade combine to prevent other plants growing. But you can see from the wide variety of forms available, that they offer much more. After being over-planted in the 19th and early 20th centuries, gardeners fell out of love with them, but they are ripe for a comeback, in this time of urban gardens and busy gardeners, searching for easy plants that will bring color and interest, and grow anywhere.