The Holly Tree, often associated with the winter season, is also well-known among landscapers and cultivators as the perfect privacy tree. With between 400 and 600 different species within the genus, The Holly Tree has everything from climbing vines and shrubs to both evergreen and deciduous trees. Holly Trees create dense hedges, which form privacy barriers around homes. The most common types of Holly cultivated and planted in the United States are American Holly and Nellie Stevens Holly, though there are many other varieties. Both species offer ornamental and privacy benefits, and these species are typically found in the east from eastern Massachusetts south to central Florida and west to California, stretching up as far north as Washington in the far west and Kansas in the central United States.

Hollies are also especially fast-growing, with Nellie Stevens Holly topping the list at 3 feet per year. These fast-growing privacy trees are often pruned as hedges, blocking out unwanted noise and intrusions. Although many species can reach upwards 50 feet, many landscapers choose to prune the tree to a more manageable height. Hollies can also be planted individually as ornamental trees, accenting gardens and entryways.

Although Holly Trees are adaptable and easy-to-grow, it is important to prepare before purchasing them or any tree. Different species of tree require different types of soil, watering schedules, and planting locations. Holly Trees grow relatively easily, but it is still important to take a quick glance at the needs of Holly Trees before reading about the specifics in the following sections.

How to Buy Holly Trees

The Tree Center tends to early Holly Tree specimens carefully, offering only the most meticulous Hollies, including the American Holly and Nellie Stevens Holly, the two most popular Holly Trees. Buying Holly Trees from The Tree Center ensures the trees initial care will encourage future growth coupled with proper care and planting at home.

How to Plant Holly Trees

Water: Water immediately after planting and once per week for the first six months, unless it rains.

When to Plant: Spring is best, though Hollies can also be established in fall. 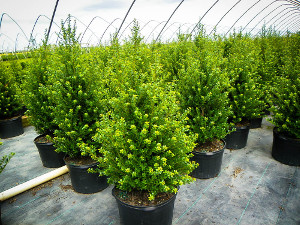 Whenever planting a new tree, it is essential to investigate the planting area carefully. Holly Trees are relatively adaptable; however, these trees prefer slightly acidic soil, well-draining loamy soil, and full sun. If planting a privacy screen hedge, plant the individual Holly Trees between 4 and 6 feet apart. Alternatively, Holly Trees can also be used as accent trees. These can be planted closer to buildings than many other ornamental trees, as the Holly roots quickly branch.

Once the location has been identified, obtain the Holly Tree from The Tree Center and observe the size of the root ball. Generally, the landscaper should dig a hole approximately three times the diameter of the Holly Tree’s root ball. Do not be as concerned with depth as width; if the hole is too deep, necessities like water and oxygen will have a difficult time reaching the roots of the tree. Find a partner and stand the tree vertically in the hole.

Backfill with soil and water. If using mulch, add it now – packing the natural wood chip mulch to a depth of three to four inches. Then, water the area fully. It is best to water the tree once a week with two to three gallons of water to a depth of three feet. Watering the trees frequently, but lightly, is not as beneficial.

Soil is essential to tree growth, as its individual unique qualities related to water drainage, nutrient components, and pH can impact the growth of a tree. Soil is characteristically broken up into three categories: silt, clay, and loam. Silt and clay both trap water, making it difficult for the roots of trees to absorb water. Loam is a mix of nutrient sizes and humus, or organic matter. Loam also has small pebbles intermixed with the soil, which help to provide aeration. Remove any rocks larger than a dime from the soil if found.

Holly Trees can still grow in clay and silt soils, but landscaper maintenance will be needed. If planting in clay or silt, be sure to avoid “glazing” or compacting the sides of any hole. Glazing occurs when the sides of the hole are packed smooth so water cannot be transferred. Serrate the sides of the hole using the edge of the shovel or a forked-tool. This will enable water and air to move more quickly between vertical sections in the soil.

Most Holly Trees prefer well-drained soil, though some species (Ilex glabra) manage well in wetter areas. Both trees require moderate water access, and irrigation systems can be beneficial in securing appropriate water distribution. Natural water access should be sufficient; however, if without rain, be sure to water the Hollies once per week.

Mulch and fertilizer offer benefits to gardening connoisseurs. Fertilizer is unnecessary with Hollies, which will find sufficient nutrient matter in the soil make-up. Mulch, on the other hand, provides numerous benefits to Holly Trees; additionally, it can be beneficial to the garden areas and planting regions surrounding the Holly Tree. Mulch allows water and air further opportunity for entering the soil near the tree.

Using natural mulches is best, as mulch made of wood will decompose, adding to the nutrient matter of the soil. Place the mulch so it rises to a height of between three and four inches, up to but not including the base of the tree. Water the mulch surrounding the tree, and the water will be transferred more readily to the root systems of the plant.

Holly Trees are often disease and pest resistant, and these hardy trees require minimal effort. The spiny or serrated leaves make the tree an excellent privacy screen tree or hedge, which still attracts birds and wildlife. One member of the genus, Nellie Stevens Holly, is also a fast-growing tree, maintaining a fast growth rate of between 3 and 5 feet a year.

Holly Trees are the only genus remaining in the family Aquifoliaceae, the others going extinct. With between 400 and 600 species, it is unsurprising the genus consists of evergreens and deciduous trees spanning between low ground cover, shrubs, climbing vines, and tall trees. The Holly berry is recognized throughout much of the United States as a symbol of the Christmas season; however, the tree’s branches and berries were used in by Pagan druids who wore Holly leaves on their heads.

There are between 400 and 600 species of Holly within the genus, and, therefore, Hollies are suitable to many areas around the world, primarily in temperate and subtropical climates. American Holly is one of the most popular Hollies, reminiscent of the traditional English Holly. Nellie Stevens Holly is also a bestselling Holly Tree; this Holly is actually a hybrid between the English Holly and Chinese Holly.

Most Hollies are dioecious, meaning both female and male plants are needed in order to reproduce. Nellie Stevens Holly was cultivated to remove this barrier, allowing the Holly to produce its iconic red, white, yellow, purple, or black berries, or drupes.

Nellie Stevens Holly is quickly becoming the most popular Holly Tree on the market. This is due to fast growth rate of 3 feet a year, the tree’s ability to create a fast-growth privacy screen hedge, and the minimal effort needed on the part of the landscaper. Nellie Stevens Holly offers all of this with its colorful red berries, a great improvement upon an unsightly fence. Nellie Stevens Holly acts as a privacy barrier, and attracts the eye throughout all four seasons. This Holly grows well in USDA Hardiness zones 6-9.

The American Holly is an award-winning tree, noted for its adaptable nature. American Holly is often used to create privacy screens or barriers, either as a hedge or accent tree. The American Holly offers color year-round, and the thick growth of its lower branches makes it ideal for barriers. Plant between 4 and 5 feet apart, as the tree will reach a mature width of between 12 and 15 feet. This distance between saplings will create a strong, dense privacy wall. American Holly grows well in USDA Hardiness zones 6-9.

Holly Trees have many benefits, some of which vary between species:

Holly Trees, such as the American Holly and Nellie Stevens Holly, are easy to grow. Holly Trees thrive on neglect, and this makes them a good fit for the beginning horticulturalist. In addition to the minimal maintenance, Holly Trees provide privacy barriers and accent ornamentals.

For the most part, Holly Trees are adaptable. These easy to care for trees are both disease and pest resistant. With proper watering and soil conditions, Holly Trees are sure to grow with ease. Follow the instructions above and the Holly Tree will provide all year long. 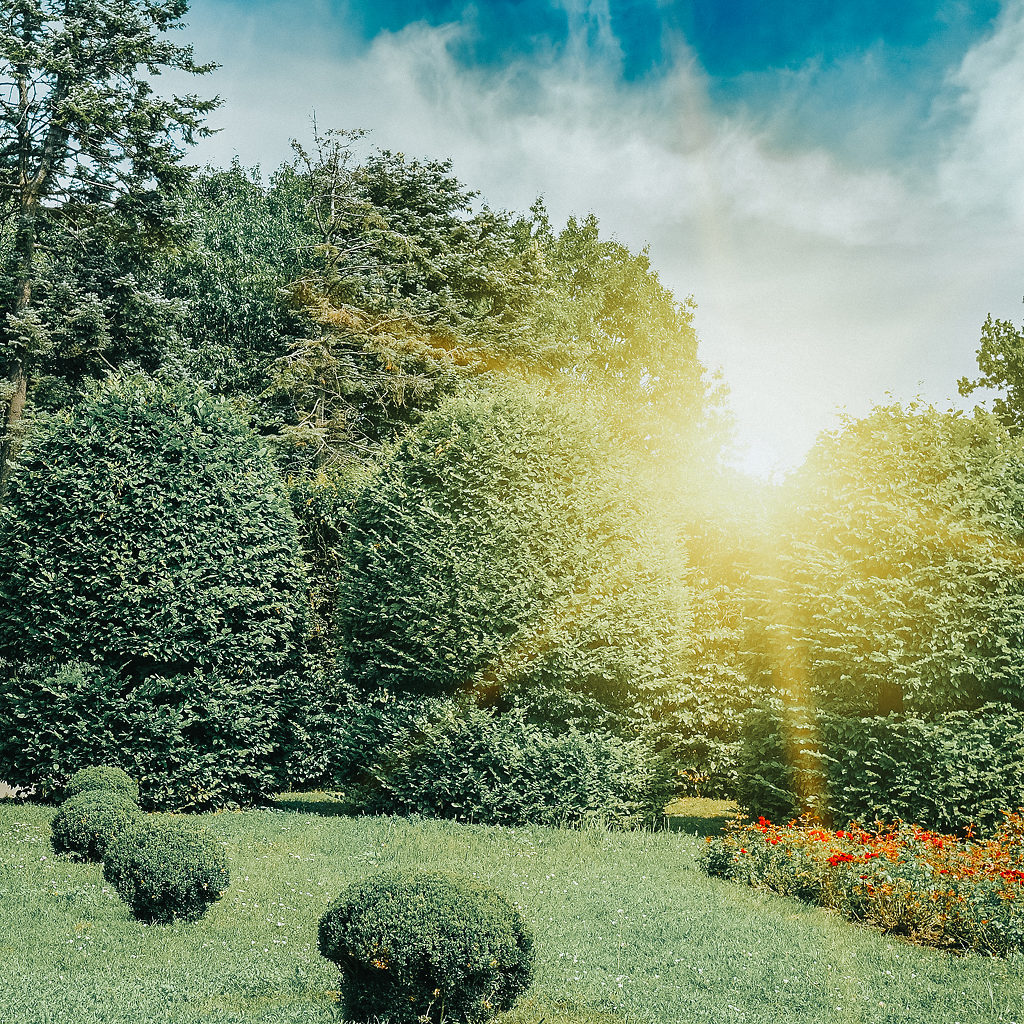 Privacy is a major consideration for many gardens, but you are about to solve that problem in your own yard. The plants you chose for your screen have arrived and now it’s time…