The meaning of “Evergreen” is pretty clear, mostly because it’s an English word. “Deciduous” is Latin, which puts it at a disadvantage right away, and even if you do know what it means that’s not necessarily very helpful. In fact it means “tending to fall off” or, sometimes, “falling off at maturity”, and neither of those meanings really covers the way it’s most commonly used today. To a gardener deciduous basically means “not evergreen”, and it covers all the plants that lose all their leaves for part of the year.

In practice this usually means they shed their leaves in fall then grow new ones in spring, but not always. We’re used to it working that way because winter is the season that’s hardest for trees, but in many regions the difficult time of year is the dry season. In tropical or subtropical climates you’ll often find that plants shed their leaves as rainfall starts to fade away, and regrow them when wetter weather returns. Closer to the poles, though, they lose their foliage in late fall – and in between, for example around the Mediterranean, you get a lot of evergreens.

Not All Conifers Are Evergreen 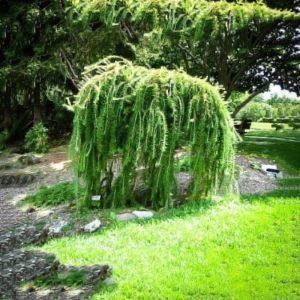 We often think of evergreens as meaning conifers, but that’s not always the case. Some conifers, like larch, are deciduous. Meanwhile many broad-leaved trees are evergreen – holly is maybe the best known example but there are plenty others. Rainforest trees and eucalyptus are evergreen and so are some Mediterranean maples. If a tree is in a climate where it can grow easily all year round it makes sense for it to be evergreen. Otherwise being deciduous has a lot going for it.

All trees shed their leaves, because any leaf is delicate and has a limited life. Over time they’re damaged by the sun or disease, or suffer from insect attacks. Because their structure is so fragile the tree can’t efficiently repair them; it’s much easier to simply drop the leaf and grow a new one.

The difference between evergreens and deciduous trees is that evergreens lose leaves in a steady trickle all through the year, while deciduous ones drop them all at once. In the space of a year an evergreen will usually lose just as many leaves but it always has plenty more still on its branches. Deciduous trees don’t – so how do they survive?

Evergreens are active all year round, although their level of activity usually isn’t constant. Deciduous trees are different. After they shed their leaves they become dormant, just ticking over at the level needed to keep them alive, until the new growing season starts. Usually the appearance of fresh leaves signals the end of dormancy but some plants flower first – this usually happens in plants that rely on the wind for pollination, because the pollen can be distributed more effectively when there aren’t leaves to get in the way.

Going dormant lets the tree save its energy, and there are other advantages too. Leaves have a huge surface area – the foliage of a mature oak can easily add up to more than 10,000 square feet. In harsh winter weather snow and freezing rain can quickly coat surfaces in ice and it can build up very quickly. Ships have sunk because the weight of ice on their upper works destroyed their stability, and trees are even more vulnerable. A big tree can collect hundreds of pounds of ice, and with a full canopy of leaves that would become tons. Even bare branches are sometimes brought down by accumulated ice, and retaining leaves would almost guarantee disaster. Losing their foliage before the frost and snow arrives seriously improves a tree’s chances of survival.

What Happens to Deciduous Trees in Fall

What actually happens in fall is a bit more complicated than the leaves simply falling from the branches. Scientifically it’s called abscission, and it involves a lot of changes inside the tree. Most of this is to do with chlorophyll, the chemical trees use for photosynthesis. Trees build up their stores of this during the summer, but when fall arrives they start to produce less and the green color of the leaves begins to fade. This that leads to other changes and it’s one of these that makes the leaves fall.

When a new leaf grows, the tree forms a special joint at its base, where it joins the stem. This is called an abscission layer and it contains layers of cells that cling together but aren’t solidly attached. The clingy cells depend on a hormone called auxin, which is produced in every part of the plant, and as long as the auxin level is about the same on both sides of the abscission layer the leaf will stay firmly on the tree. When leaves start to fade in fall, however, they also stop producing auxin. When the level in the leaf gets low enough the cells on that side of the layer stop clinging and the leaf falls off.

If you’re wondering why trees suffering from disease or pests often drop affected leaves, it’s because stressed parts of the tree also produce less auxin. This is a defense mechanism; the tree is basically trying to get rid of unhealthy parts in an attempt to clear the problem.

There’s one last thing to mention about deciduous trees, and that’s the often spectacular color displays they put on just before the leaves fall. The main cause of this is the loss of chlorophyll in the leaves – as the green color fades other pigments in each leaf become more obvious. These yellow, orange or red pigments are produced in late summer when the abscission process has already started – sugars are trapped in the leaves as the abscission layers slowly begin to fail, and the leaf turns them into the chemicals that will eventually produce those fall colors. Chemicals in the soil can enhance the color of the leaves. New England is famous for having the most vivid fall landscapes in the world and that’s partly down to the variety of species there, but minerals in the soil play a role too.

So deciduous trees are using a strategy that saves them energy, lets them change their leaves at a convenient time, and protects them from the worst of the winter weather. It’s a much more complex process than it looks, and also signals that the tree is about to become dormant and shouldn’t be disturbed through its quiet season.