The fragrance of the Wisteria catches the nose, but it is overtaken by the lantern-like hanging lavender blossoms that cover the sides of buildings, privacy screens, and fences. The fast-growing Wisteria Vine is a quick climber, sometimes gaining more than 10 feet in a given season. Not all Wisteria Vines will flower in the first few seasons, so if the lavender blossoms are essential within the first few growing seasons, consider young flowering varieties, such as the Amethyst Falls Wisteria Vine.

Research is an essential first step in the planting process. Finding a plant that is the best fit to any garden is the best place to start. Wisteria Vines require site preparation, as a trellis or support system will need to be put in place prior to their planting. Wisteria Vines prefer full sun shade and well-draining soil, though they are adaptable to variations on both. Read the quick facts below before examining the following sections in detail to determine if the Wisteria Vine is the right fit for the given landscaping location.

How to Buy Wisteria Vines

How to Plant Wisteria Vines

Sun: Plant in full sun. Some partial shade in the afternoon is acceptable.

Water: Water immediately after planting and once a week in summer if rainfall is less than 1 inch.

When to Plant: Plant in spring or fall. 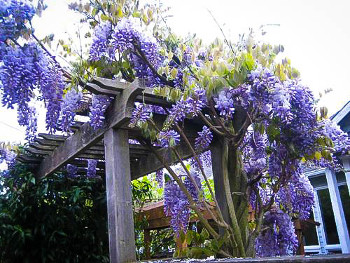 Wisteria Vines require proper planning prior to planting. Wisteria Vines can grow up to 10 feet a year, and they will quickly reach 20 feet high. It is important to adequately prepare the planting site for the Wisteria Vine by installing a trellis, arbor, wire system, or pergola. Several gardeners have found success using small rods on the sides of the home coupled with rigorous pruning and guidance. Whatever support system is preferred, the beginning rungs should be installed prior to spring planting.

Hold the Wisteria Vine vertically in the hole and begin backfilling with soil and water. The top of the root ball should be protruding from the soil by 1 inch. If using mulch, add the 2 inch layer now. Water the Wisteria Vine immediately.

Soil is an essential aspect of growing most trees and shrubs, Wisteria Vines included. The soil carries water, air, and nutrients through to the root system of the plants. Soils can be categorized by their drainage, pH, and nutrient matter, among other properties. Drainage refers to the soil’s ability to drain water. Wisteria Vines prefer well-draining soil, so avoid sandy soils or those that invite standing water.

The pH of the soil can vary between being acidic and alkaline. Although Wisteria Vines prefer neutral to slightly acidic soil in the 6.0 to 7.0 range, they are often flexible and grow in alkaline soils, too. Soil contains various minerals that affect growth rate. Most notably, nitrogen, phosphorus, and potassium impact plant growth. Wisteria Vines prefer soil with slightly elevated levels of phosphorus, so a 1-2-1 ratio of these can be beneficial. To ensure success in planting, soil can be tested either using an at-home soil test kit or the services of a local landscaper.

Wisteria Vines have good drought tolerance, though they prefer moderate rainfall. Simply water the Wisteria heavily immediately after planting. After that, just make sure the Wisteria receives at least 1 inch of rainfall a week, especially in summer. If droughts or dry spells commonly affect the planting region, consider an irrigation system that will water the roots of the Wisteria, such as a drip or hose sprinkler system.

Mulch and fertilizer can be used successfully to encourage growth. Both benefit the plant by balancing compromised soil and conserving water. Mulch should be applied immediately after planting and once per year afterward. Apply a 2 inch layer of natural mulch, such as those consisting of wood chips or bark in a three foot radius surrounding the Wisteria Vine’s base. Avoid contact between the mulch and the vine’s stem.

Fertilizer is generally not recommended for use with Wisteria Vines, which are fast-growing and need little aid. Only use fertilizer if soil is of an exceptionally poor quality. Even then, be sure to follow the directions carefully to avoid over-fertilization. In place of fertilizer, many gardeners simply scratch bone metal into the soil, increasing the phosphorus content. It is not advisable to add nitrogen to the soil.

Pruning Wisteria Vines is essential to earning the blooms for which they are known. Pruning will increase flowering while maintaining a controllable vine. Train the strongest new vines, known as main lead vines, along the support system, pruning off smaller shoots, pinching off the main lead vine at the desired height. It is advisable to prune this way through summer. In early winter, cut back any unpruned main lead shoots to one-half their original height. Prune any side shoots to 1 or 2 inches. Prune once more in this manner in late winter. Continue maintenance pruning for the entirety of the Wisteria Vine’s lifespan.

The genus Wisteria includes 10 flowering climbing vines, which are native to the Eastern United States and Eastern Asia. This fast-growing, hardy flowering vine is considered invasive in parts of the southern United States, as it can quickly strangle large trees. Proper support systems are necessary when planting and maintaining a Wisteria Vine.

Hardy in USDA Hardiness Zones 4 through 9, the hardy and vigorous Purple Wisteria Vine offers enormous bushels of purple flowers, sometimes measuring over a foot in length. These bundles of small flowers hover above ground, as the Purple Wisteria Vine will climb buildings, trellises, arbors, or trees with ease.

Wisteria Vines are rather hardy, and they rarely succumb to serious diseases. Powdery mildew, crown and root problems, and some pests may affect the vine. Powdery mildew is easy to spot as it leaves large yellow to white fuzzy patches on the leaves. Simply remove the affected leaves and prune to encourage air flow in the plant. Crown and root problems are more severe, as they can eventually tear down the Wisteria Vine. Remove any unusual swollen knots or sunken areas from the Wisteria, and monitor any galls or cankers that may form.

Finally, the Wisteria borer digs into the woody stems of the Wisteria, sometimes cutting off transport of water, air, and nutrients. Keep the Wisteria Vine healthy as a preventative measure, since Wisteria borers prefer sickly trees. Once inside, these borers are difficult to control.