Evergreens play a vital part in every garden, and when we meet an evergreen that is also capable of growing in shade, and that can be clipped into just about every shape you can imagine, then surely no garden can be without it. This special plant is the Yew Tree, more often seen as a clipped bush than a tree, but capable of growing into one in time. Their rich green foliage, which can also be found in shades of gold, is the perfect background for more colorful plants, and it gives a sense of stability and permanence to any garden. While we love color and change, calming deep green is just as important in a balanced garden, and Yew Trees certainly have that, as well as the ability to grow just about anywhere in the garden. Their tolerance of shade makes them invaluable, and they respond so well to clipping that they make the best an most durable hedge possible.

Using Yew Trees in Your Garden 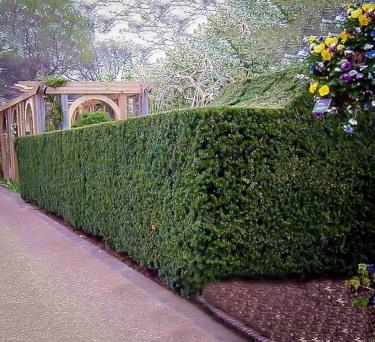 Yew Trees have many uses in the garden. Although not seen so often, the most basic one is to simply let them grow naturally, the way their natures intended them. Some forms will grow into upright columns of rich green, while others will spread wide, into broad bushes with irregular outlines. Although not often done, this is a terrific way to grow Yew Trees in more natural garden styles, without the need for regular clipping. These trees will naturally grow denser as they mature, and turn into wonderful specimens – just plant them and leave them to grow, what could be easier?

At the other extreme, Yew Trees respond wonderfully to trimming, and the more they are clipped, the denser they become. For hedges – short and tall – they are ideal, growing into solid walls of green that can be clipped into rounded or straight forms very easily. Because they grow so well in both sun and shade, a hedge will look uniform and beautiful even if it passes in and out of the light crossing your garden – very few other plants can do this.

Around your home, in the foundation planting, solid plants are great choices, as they screen features like air-conditioners and meters, visually tying together these areas, and creating a green cushion that anchors and connects your home to the garden. With both upright and spreading forms to choose from, plus golden-leaved forms too, these plants bring grace and calm, and look great every day of the year. You can be strict, and create cones, balls, spirals and columns, or more casual, and clip into rolling clouds below your windows and around your doors – the choice is yours.

It is in shade that Yew Trees have the greatest value. Every garden has shady areas, and as trees mature the shade tends to increase. Most evergreens need lots of sun, but Yew Trees thrive in partial shade, and even in light full shade, such as on the north side of fences, walls and buildings, or beneath deciduous trees. Clipped or un-clipped, they find a natural home in these areas, and solve your shade problems instantly.

Let’s not forget planters and boxes, where Yew Trees are also perfect, because their size can be so easily controlled, and they can be trimmed into many forms that compliment the rest of your garden. In fact, even if you only have a terrace or balcony, Yew Trees give ‘instant maturity’ to those spaces, and a stable feel to spaces that are often only filled with temporary annual flowers.

The Yew Tree is a coniferous evergreen, related to plants like pine, spruce, fir, cedar and cypress. This slow-growing tree can in time become large, and although most trees are perhaps 10 – 15 feet tall, this long-lived tree can reach 60 feet or more in time, developing a massive trunk. The bark is reddish and flakes away in irregular small plates. The leaves are arranged in a spiral around the stem, but then twisted to create two rows along opposite sides. The needle-like leaves are deep green, ½ to 1½ inches long, and no more than one-eight of an inch wide. They are soft, and glossy on the upper surface.

Although it is a conifer, the Yew Tree does not have the typical cones seen on other conifers. Instead there are separate male and female trees. Male trees produce pollen in spring and female tree often have red berries in fall and into winter. These are about ½ inch long, red and juicy with a hard seed inside them. Birds eagerly eat them, which in the wild spreads the seeds.

The Toxicity of Yew 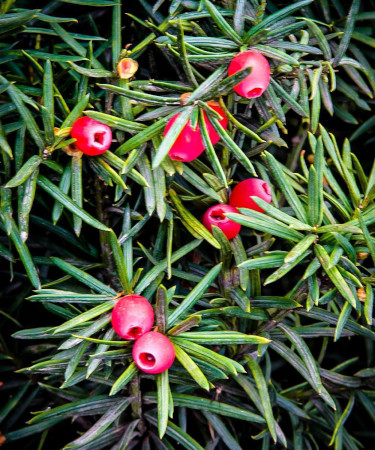 Almost all parts of the yew, including the leaves and the seed, are toxic to humans. Birds are protected because the seed has a protective coating that they do not digest. The flesh of the berry is not toxic, and in fact is pleasantly juicy and sweet. Cattle and horse can die from eating the foliage, but deer are not affected, and they will eat yew.

Almost all cases of human death are the result of deliberate ingestion, and almost all accidental poisoning cases are with children under 12. Studies show that deaths from accidentally eating berries or leaves are extremely rare, and victims normally recover quickly, with no ill effects. If you are concerned, choose male varieties of yew, which of course do not produce berries. Some people are however allergic to the pollen from male yew, an it can trigger asthma. So if you don’t have small children it may be better to choose female varieties.

Growing and Caring for Yew Trees

Depending on the exact type and variety, Yew Trees are available that are hardy in all zones from 4 to 9. Yew Trees will grow in almost all light conditions, from full sun to light full shade.

Yew Trees are tolerant of most kinds of soil, both acid and alkaline, and from sandy soil to clay. The only limitation is drainage – they do not like ‘wet feet’, and they should not be planted in damp, low-lying areas that are always wet and poorly-drained. Once established these trees will tolerate normal dry summer conditions in cooler zones, but they grow best with a regular supply of water. Spring and summer feeding with fertilizers blended for evergreens will give improved growth, especially with hedges and plants that are trimmed regularly.

For hedges and trimmed plants, trim anytime between late winter and early fall. Yew Trees respond well to trimming, and they develop dense surfaces quickly. One great advantage over other conifer evergreens is that you can trim back into thick branches, with no leaves, and they will quickly re-sprout and green-up. This makes it easy to renew hedges and keep then narrow. Simply cut one side back very hard one year, wait for it to re-sprout, and then cut back the other side a year or two later. Hard trimming is best done in spring.

Some experts consider that there is just one species of yew, but most recognize about 9 species in the genus Taxus, plus some closely-related plants, like the Plum Yew (cephalotaxus).

For gardeners, the important types of Yew Tree are the English Yew (taxus baccata), the Japanese Yew (taxus cuspidata), and the Hybrid Yew (taxus x media. To the ordinary eye their foliage is identical.

This Yew Tree is widely grown in Europe, but in America it is only hardy in zones 6, 7, and 8. The wild tree is roughly pyramidal, and usually matures between 30 and 60 feet tall, but this form is hardly ever seen in gardens. Garden forms can be roughly divided into:

1. Narrow, upright forms, such as the Irish Yew, or Columnar English Yew (taxus baccata ‘Fastigiata’). This tree grows into a narrow column of dense, upright branches, about 10 feet tall when 10 years old, and no more than 2 or 3 feet wide. It makes an excellent accent specimen tree. Usually female, with heavy crops of berries.

2. Broad, spreading forms, with names like ’Repandens, ‘Procumbens’, or ‘Prostrata’. These typically grow 3 to 4 feet tall in time, and spread 6 to 8 feet wide, if untrimmed.

Golden and variegated forms, with yellow leaves, or leaves edged in yellow to white, can occur in both upright and spreading yews. Some forms show this effect most in spring, and fade to green in summer, but others, such as the David English Yew (taxus baccata ‘David’), hold their golden color well throughout the year.

In the wild this tree is very much like the English Yew, but it is native to Japan, North Korea, northeastern China and the extreme southeast of Russia. It has been cultivated for centuries in Japanese gardens, usually in the dwarf, compact form called ‘Nana’. It was introduced into North America in 1833, and it is widely grown in all northern states, since most forms are hardy to zone 4. The variety ‘Prostrata’ is wide-spreading, and fast-growing, adding as much as 12 inches of new growth a year.

This plant, also called Foundation Yew, is a hybrid of English Yew and Japanese Yew. It was first created around 1900 by T.D. Hartfield at the Hunnewell Estate Pinetum, Wellesley, Massachusetts. Combining the best characteristics of both trees, and almost as hardy as Japanese Yew, this plant is widely grown in all cooler states. Just as with English Yew, there are many forms of Hybrid Yew, both upright and spreading, as well as forms with golden foliage.

Hybrid Yew tends to be faster growing and more reliable than Japanese Yew, and it is fully hardy in zone 5. The same cross was also made around the same time by Henry Hicks Nursery in Westbury, Long Island, New York, and one of the seedlings become Hicks’ Yew (Taxus × media ‘Hicksii’), a very popular and widely-planted upright form ideal for hedges and specimens.

Looking very much like a Yew Tree, and closely related, is the Plum Yew, a tree native to Japan, China and Korea. Despite its appearance, you can tell this plant is not a Yew because the fruit is an inch-long green or brown ‘plum’, not the red berry of a true Yew Tree.

The Plum Yew is much more adaptable to hot areas, growing well in zones 8 and 9, where English Yew does not enjoy the heat. There are several varieties, including the outstanding ‘Korean Gold’, which becomes an upright column of golden foliage, 10 feet or more in height, and up to 6 feet wide. One of the best spreading forms is ‘Duke Gardens’, which will grow 6 feet wide in ten years, but only 3 or 4 feet in height. Neither form is likely to flower or fruit.

In moderate climate zones of America, choose the English Yew, with all its varieties. In colder states, forms of the Japanese Yew or Hybrid Yew should be in your garden, and in the hottest areas, choose Plum Yew instead. Wherever you live you can enjoy the shade-tolerant evergreen foliage of the Yew Tree – just choose wisely.