Maples are among the most popular trees for the garden, especially as shade trees. No wonder! With their iconic leaves and spectacular fall colors, these hardy trees will grow in many climate zones and many different conditions. As well, there are so many to choose from! Choose a grand Sugar maple or the smallest Japanese maple – there is a maple tree for every garden.

Maple trees are usually healthy and live for many, many years. There are a few diseases that can occur and it is helpful to be able to recognize them and even more helpful to know what steps can reduce the chances of them occurring. So what signs might be telling you that your maple tree is in trouble?

The most common – and least important – problems can be seen on the leaves. There are a variety of leaf diseases found in maple trees that vary in intensity from year to year and from place to place. These usually show up as different kinds of spots on the leaves. They are usually seen in mid to late summer and none of these diseases are life-threatening. The most common are listed below:

This is seen as black, roughly circular spots on the leaves. These can be very small or up to ½ an inch across. Each circle is surrounded by a yellow margin. There may be one or several spots on each leaf and leaves with a lot of spots may turn yellow and fall prematurely. This disease is caused by a fungus called Rhytisma.

Maples can show several different leaf-spots that are usually brown, scattered all over the leaf and sometimes join together into larger areas of dead tissue. These are hard to accurately identify and are caused by several different fungi.

This leaf disease causes large, irregular dead areas to develop around the edges of the leaves and in their centers. The leaves will shrivel and then fall from the tree. The dead areas are often limited by the veins. Several fungi can cause this disease, which is often seen suddenly when the weather is suitable, and then not seen much again for several years.

In hot, humid summers maples can sometimes show a white, powdery coating on the leaves, almost like flour has been thrown onto them. This is another fungus disease, usually caused by an organism called Erysiphe.

Will These Diseases Harm My Tree?

Although these leaf diseases can be unsightly and cause trees to lose a lot of leaves during the summer, they are very rarely harmful and next spring the trees will grow normally, with lots of fresh, healthy leaves. Trees that are well-watered, fertilized and cared for with usually develop fewer leaf diseases. If you have a severe outbreak, make sure you rake up the leaves and destroy them, as these diseases go through the winter on old leaves and then re-infect the trees next summer. Sprays and chemicals are rarely needed, as your tree will normally never be seriously harmed by these diseases. 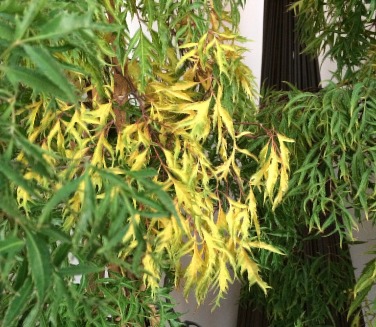 This is a much more serious disease that affects all kinds of maples, but Sugar Maple and Silver Maple are the ones most commonly affected. It can also affect Japanese Maple. This disease is another fungus that enters through the roots and blocks the water passages inside the tree. The lack of water and nutrients flowing through the tree causes branches to die; at first small ones high up in the tree and later whole limbs lose their leaves and die. Often this is first noticed when a branch starts to show fall colors in late summer, long before other trees begin to color at all.

After a few years no more leaves will grow and the branch will die. Sometimes the disease spreads quickly and a tree may die in a few years. Other times a tree may live for a long time, slowly becoming weaker and less attractive, but never dying completely. You can often confirm that you have Verticillium Wilt by taking a branch that is showing these symptoms and cutting it across. You will see brown staining of the wood in a circle a little below the bark. This confirms you have the disease, but its absence doesn’t mean you don’t.

Since Verticillium enters through damaged roots, it is important to try to not damage the roots of your maple trees. If you need to have trenches dug and roots have to be cut, use sharp tools and make smooth, clean cuts. Don’t leave torn, damaged roots when the trench is filled. If you have a lot of disturbance and construction around a valuable tree, it is a good idea to have a tree surgeon come in immediately afterwards and use a root-feeder to fertilize your tree. The will boost growth and help the tree protect itself from any Verticillium fungus that has entered the tree. There is unfortunately no cure for this disease, but of course most maples will not contract it.

Japanese maples in particular, but other maples too, especially when young, can suddenly have the leaves dry out, first around the edges and sometimes the whole leaf. This is not a disease but the result of too much sun, often combined with lack of water. This will usually be seen during a long hot and dry spell, so remember to keep your tree well-watered when the hot weather arrives. If you have a Japanese maple that regularly dries up like this in the summer, despite watering it well, you might consider moving the tree into a shadier part of the garden. This is easily done during the winter while the tree is dormant. Dig it up with plenty of soil and water it thoroughly in its new location.

It might look like maple trees have a lot of problems, but really they are usually healthy and among the best choices you can make for your garden. If you watch out for diseases and know how serious they may or may not be, you will enjoy your tree for many years.

thetreecenter.com has a Shopper Approved rating of 4.8/5 based on 26853 ratings and reviews