Go for a walk in the woods and you’ll see plenty of fungi growing on trees. Any old stump or deadfall is a potential home for a crop of them, whether it’s mushrooms or plate-like bracket fungus. The many fungi that appear on dead wood are an essential part of nature, helping to process old trees back into the food chain. However some of them can be a serious problem for gardeners.

Fungi are unusual organisms. We usually think of them as plants, but they’re not; they’re a whole separate type of life. Biologists class living things in five “kingdoms”; bacteria, protists (an assortment of single-celled organisms), plants, animals – and fungi. In many ways fungi are more like animals than plants, because instead of manufacturing their own food from carbon dioxide and sunlight they digest parts of other organisms.

Fungi come in many shapes and sizes, with the large ones being the most conspicuous. Often a fungus is like an iceberg – what’s visible is only a small part of what’s there. If you see a mushroom or puffball you might think that’s the whole thing, but in fact it’s just a fruit. Its purpose is to grow, then scatter, the spores that will grow into more fungi, and it won’t last for long. The actual organism it’s growing from is a network of threads buried just below the surface, and this network is the feeding, growing part of the fungus. In the case of a mushroom of puffball it’s nourishing itself on decaying plant matter in the soil. Other species will be feeding on a dead, or living, tree. 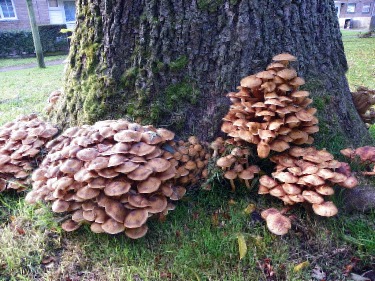 If a fungi feeds on stumps or fallen branches it’s not a major concern for gardeners, but ones that grow as parasites on living trees can be a more serious problem. Bracket fungi are common on older trees, and often people don’t bother with them. Some are even valuable; the oyster mushroom is a common parasite on most broad-leaved trees, while porcelain fungus grows on beech, and both of these are edible. They can be very damaging though.

Occasionally these fungi infect a seed and linger in the tree’s sapwood as it grows, but the fungus itself doesn’t become active until the tree is diseased or stressed. Others establish themselves where a tree has been damaged – on the end of a broken branch, perhaps, or through a gouge in the bark. A few species form a beneficial relationship with their host tree; the fly agaric, the classic white-spotted red toadstool, grows around the roots of birch or pine and protects them against parasitic species. Others will damage, and can kill, a tree.

Most tree fungi consume decaying wood, but there isn’t a lot of that on a healthy tree. Some species cheat by excreting chemicals that cause rot in the surrounding wood. That gives the fungus a steady supply of food but eventually the infected branch or trunk will become brittle, and can break suddenly. Unfortunately you can’t solve the problem by just cutting away the visible mushrooms or plates, because the heart of the fungus is those threads running through the bark and sapwood. The most reliable solution is to prune the infected parts with a disinfected saw, then dispose of them far from the tree. You can also spray the tree with a fungicide, such as Bordeaux mixture. Regular sprays when buds are swelling, and again when the tree flowers, can help prevent infection.

Chicken of the woods – Grows on the trunks of oak, willow, yew, cherry and sweet chestnut in summer and fall. Young plates are edible.

Oak bracket – A parasite of oaks, growing around the base of the trunk. Eventually the trunk can snap, bringing down the whole tree.

Birch polypore – Usually grows on dead birches but can also infect live trees. When it does it usually kills them.

Honey fungus – Infects the roots or trunks of most tree species and produces dense masses of mushrooms. Causes very aggressive rot and is considered one of the worst tree parasites. Can send out threads under the soil for several yards, and attack new trees. Edible when cooked, but raw ones are mildly toxic.

As well as large tree fungi there are a host of small ones; these are harder to spot and often equally dangerous to the tree. Most forms of rot, and all mildew, are caused by fungi. The visible signs of these can vary but what’s causing the problem is still fungal threads that have invaded the tree and are slowly spreading through it.

Small fungi often affect leaves but can be found in roots as well. Like their larger cousins they slowly kill the infected parts of the tree so they can feed on it. Some of them can spread very quickly, so it’s essential to look for signs of them and act quickly if you see anything suspicious. Again pruning, then disposing of the affected parts well away from your tree, is the most reliable solution in most cases. Any infected tree should also be sprayed with fungicide.

Here are some of the worst small fungi:

Crown rot – One of the most dangerous fungi, this affects almost all fruit trees and also many shrubs. Infected trees will look discolored and can die rapidly. Unfortunately despite the name crown rot is caused by a fungus that lives in the soil and infects the roots; by the time it becomes obvious there’s usually nothing you can do to save the tree. Spray fungicide around the roots to protect healthy trees from infection.

Verticullum wilt – Caused by six related species of fungi, the main symptom of this is wilting stems or dying foliage. Again it enters through the roots, usually when they’ve been damaged, and is much easier to prevent than treat.

Black spot – As bad for trees as it is for pirates, black spot appears as dime-size black circles on leaves. It can spread to nearby leaves if the air is humid, and fallen infected leaves can pass it on to other plants. To control and eliminate it clear away fallen leaves from around the tree, and prune any infected areas. Securely bad the debris, or incinerate it.

Powdery mildew – one of the most common problems, this shows up as white, powdery spots on leaves. It can infect most plant species, but rarely does much damage. If your tree is infected prune away all mildewed areas then spray with fungicide. Protect trees by keeping them pruned and thinned to improve air circulation – these fungi thrive in damp places that never get a chance to dry out.

Though these are some of the most common, there are thousands more types of tree fungus, many of them harmless and others damaging. Make sure to check your trees regularly for any unusual growths or unexpected changes in foliage color, and if you do find signs of fungi take action right away. The longer they have to get established the harder it will be to do anything about them.