Kiwi Tree and Plants For Sale

Although Kiwi fruits are one of the most popular fruits at this time, those with a longer memory will remember that a few decades ago they were almost unknown. Today they find a place in every fruit salad and salad plate, as well as being delicious to eat fresh just as they are. So naturally many of us would like to grow our own Kiwis and be able to pick them right from the garden. There are, however, two problems.

One is that the plant is only hardy to zone 7 and only does well in zones 8 and 9, so for anyone north of Louisiana or coastal Georgia, that is not possible. In addition, the plants are fairly large and need a male plant to fertilize the female plants, meaning you have to have room for ta big male vine that produces no fruit at all. However, all that has changed. Now there is the Issai Arctic Kiwi, a different species that grows from zone 4 to 8 and is self-fertile, meaning that only one plant is needed. So now, everyone in America can have their own Kiwi Plant in their garden and just walk out and pick healthy, delicious fruit from late summer and to the first hard frost.

Using Kiwi Plants on Your Property

Kiwi Plants are a vine that grows around 15 to 30 feet tall, so it is an excellent plant for covering a fence and it can also be trained on a wall. That way it takes up no room in your actual garden and besides providing you with bushels of delicious fruit makes an attractive cover for an unattractive fence. It will turn that old chain-link into a wall of green and provide nutritious fruit for your family. As well, Kiwi Plants are an great idea for covering a pergola or arch in your garden. Correctly pruned they will form a dense, bushy, fruit-bearing archway that will be an exciting feature in your garden.

If you have, or plan to have, a fruit and vegetable garden, Kiwi Plants can be trained on wires like grapes – that is the way they are grown commercially. They make an excellent boundary between your vegetable gardens and your flower gardens that will be highly productive. The great thing too is that you can put one anywhere in the garden, even among your shrubs on a frame or even growing up into an old tree. Compared to many other vines, Kiwi Plants are heavy, with thick stems and plenty of foliage, so make sure that your support is strong enough to hold the plants securely. 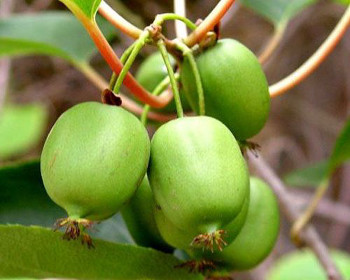 Kiwi plants belong in the botanical group Actinidia. These plants grow mostly in China, Korea and Japan, but some grow into parts of Siberia and others down into tropical Indochina. Kiwis have long trailing stems, with large, thick leaves of a simple oval shape with a crinkly edge, carried on a long leaf stalk. The flowers are quite large, almost an inch in diameter, and greenish-white in color. They all have edible fruits, which vary in size, from cherry sized to about 2 inches long. The fruits often have the well-known brown fuzz on their skin and that typical ‘kiwifruit’ center with its tiny black seeds.

There are around 50 different species of Kiwis, but the commercial Kiwi, Actinidia deliciosa, which is also sometime called the Chinese Gooseberry, is the one widely known to most people from their ready availability in stores. This is a very large plant that will reach at least 30 feet across, so to grow them you need plenty of space. Once they begin to climb up into a tree they can even reach 100 feet long and easily take over a large garden. As well, you also need to grow an equally large male plant, which takes up a lot of room just so that the female plants will produce their fruits. This plant only grows well in zones 8 to 10.

Plant scientists have looked at other species of Actinidia, to see if there was something more practical for home gardeners. For some time they have known about a species called the Arctic Kiwi, Actinidia arguta, which grows in Japan, Korea, Northern China and Russian Siberia. Growing in those areas you would expect this plant to be very hardy and it is, down to at least zone 4, and will survive minus 300F without any problem. However this plant is still pretty large and again needs a male vine so that the female vines can produce fruit.

After a lot of work however, plant scientists in Japan have found a variety of this plant, which they called ‘Issai’. This variety is different from all the other Kiwis because the flowers are self-fertile – meaning it does not need a separate male vine. As well, this plant only grows 15 or maybe 20 feet tall, so can fit in even a smaller garden and it is still hardy right down to zone 4. The Issai Arctic Kiwi has a smooth, green skin and needs no peeling. It is smaller than the Kiwifruits you buy from the store, but this vine is so prolific it makes up in quantity for its smaller size and many people think is sweeter and superior to the common Kiwi fruit.

Commercial Kiwi plants are hardy in zone 8 or warmer, so they can be grown in the South, throughout California and from eastern North Carolina down into Florida. For gardeners in the central and northern parts of the country, the Issai Arctic Kiwi is hardy all the way into zone 4, as well as growing into zone 8, so it can be grown by almost everyone.

Kiwi Plants are not particular about the soil they grow in, so any normal soil is perfectly suitable for them. They do not however like wet soils and do need reasonable drainage to do well. They will grow in infertile soils too – in fact they may grow more compactly and produce more fruit if the soil is quite poor. So if you are gardening on poor soil, a Kiwi Plant is an excellent choice both for its bushy beauty and for its delicious fruits.

They do prefer a sunny location, but will be quite happy with some shade for part of the day. Although reasonable watering is a good idea, they are also quite drought-resistant when established.

Most Kiwi Plants should be spaced 10 feet apart if you are planting a row, but the Issai Arctic Kiwi is smaller and can be spaced around 5 feet apart to make a continuous screen. New plants should be given plenty of water at planting time and watered once a week for the first season. After that you only need to water when the soil is beginning to get noticeably dry, but don’t let your plants suffer from drought or the berries will be small and wrinkled.

The main commercial variety of Kiwifruit was developed in New Zealand in 1924, by Hayward Wright and is called ‘Hayward’ after him. The major fruit producing countries are Italy, New Zealand, Chile and Greece – all countries with the right climate of heat and warm dry conditions for ripening the fruit.

The main care needed for Kiwi Plants is pruning. Since they are so vigorous they rarely need any added fertilizer, and watering is only needed for established plants during quite severe drought. There are two methods used for pruning. If properly done, your Kiwi Plants should begin to fruit within two or three years of planting, while if just left uncontrolled it may take up to six years to begin fruiting.

One method of pruning your Kiwi plants is to grow them in a similar way to grape vines, with a permanent framework of a stem and a few branches. Each winter the growth is cut back to within a couple of inches of that framework, and then allowed to grow out through the season.

The second method involved regular pruning throughout the growing season, perhaps every two or three weeks. As the long vines grow out, when they reach about 8 inches in length, they are cut back in half, to about 4 inches. New shoots will develop and these too should be pruned back. This is repeated with all the growth unless you want longer vines to fill an area of make the first covering over a pergola. Plants grown this way will be very dense and bushy, with large clusters of fruit. This is also a good way to grow Kiwi Plants in a container, which is especially suitable for the Issai Arctic Kiwi, which is less vigorous and will thrive in a large container or planter box.