Looking at how popular peanuts are as a snack, you probably wouldn’t think that up until the 1930s most of the US crop was used as animal feed. The USDA had been trying to encourage people to eat them since the late 19th century but it took a while for their efforts to pay off. Peanuts were eaten in other cultures though, and have been for a long time. Archaeologists have found cultivated peanuts in Peru that date from over 7,500 years ago and 16th century explorers found them being sold in markets as a snack.

Today peanuts are so common that they’re completely unremarkable, but in fact they’re quite unusual plants. One of the most interesting things about them is that they’re not really nuts. To botanists a nut is a seed whose ovary casing has hardened into a protective shell. That sounds like it would include peanuts, but it doesn’t. The shell of a peanut isn’t the ovary casing at all, and that’s because peanuts have a very different origin from most nuts.

How Do Peanuts Grow? 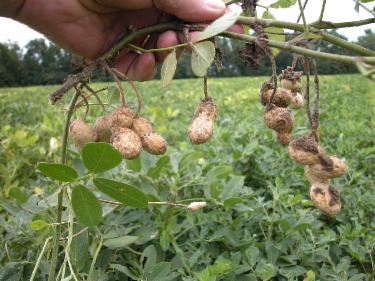 Peanuts don’t grow on trees; they come from a plant in the Fabaceae family, just like peas and beans. The hard brown shell peanuts come in is actually a modified peapod. The peanut plant isn’t a tree that produces an annual crop. Instead it’s a small bush, usually planted in late spring. The bushes are generally one to two feet high but some varieties can reach five feet. As the plant grows it develops runners around the base of the stem, and in early summer these runners will bloom with yellow flowers. The flowers are self-fertilizing and don’t last for long; they soon wither and the runners start to droop.

What happens next is the interesting bit. Most fruits grow from a fertilized flower, but they usually do it in plain sight on the branch. Peanuts do it differently. The withered flower at the tip of each runner sends out a long stalk called a peg; the fertilized ovary is at the tip of this. When the peg touches the ground it pushes down into the soil, anchoring itself firmly. Then the tip starts to swell into a pod, containing two to four seeds. This pod is the peanut shell.

How Are Peanuts Harvested?

Because of their unusual life cycle, peanuts can be tricky to harvest. Collecting nuts is easy; they can be picked straight off the branches, but for many species the quickest way is simply to lay some tarpaulins on the ground and shake the tree. Peanuts are different. The plant won’t survive the winter – peanut bushes are susceptible to frost – so the easiest way to get at the peanuts is to pull the whole plant out of the ground. Unfortunately it’s still firmly rooted; they can be pulled up by hand, but modern mechanical harvesters have a blade that cuts through the main root just below the ground, leaving the plant loose. The machine then lifts it right out the ground.

Once they’ve been pulled up, by hand or machine, peanut plants are shaken to remove the soil then laid on the ground upside down. They’ll stay there for three to four days, giving the moist pods a chance to dry out. Then the second stage of harvesting can start – the plants are threshed to separate the pods. Timing is critical when harvesting peanuts. They can’t be pulled before they’re ripe, but waiting too long is fatal. If other nuts are left on the tree after ripening they simply fall off and can be collected from the ground, but if you try to harvest peanuts late the runners will snap, leaving the pods in the ground.

Any time you buy a bag of mixed nuts it’s probably going to contain peanuts. As a food they’re a perfect match with almonds, cashews or hazelnuts. It’s hard to imagine classing them with peas and beans, but that’s what they really are. In fact boiled peanuts used to be called goober peas and were a famously unpopular food for soldiers in the Civil War. They can be used as a vegetable if you’re really desperate, but even if they don’t come from a tree we think it’s a much better idea to keep on calling them nuts.

thetreecenter.com has a Shopper Approved rating of 4.8/5 based on 23696 ratings and reviews