Pistachios are one of the most popular nuts, but they can be expensive. Their distinctive taste and naturally split shell gives them an exotic appearance and that adds to their premium image, but in fact it’s possible to grow them in many parts of the USA. It’s not necessarily easy, depending on where you are, but if you’ve ever considered growing your own pistachios this short guide might come in handy.

The first thing to know about pistachios is that they aren’t true nuts. The fruit of the cashew tree is a drupe, a single seed enclosed in a layer of flesh. Unlike most drupes, however, the flesh isn’t soft and juicy. Instead it forms a thin hull surrounding the edible seed. Although it’s not a nut, pistachios can cause allergic reactions in some people, because they contain the irritant chemical urushiol. They don’t cause actual nut allergies though.

Where Do Pistachios Come From?

The pistachio tree is originally from the Middle East and Central Asia, but it’s now been cultivated in many other places including China, India, Italy and the USA. The earliest reference to it being grown for food is in the work of the Roman naturalist Pliny the Elder, who wrote that pistachios had been cultivated since 6,750 BC and farmed in Italy since 35 AD. It’s likely that the ones grown in Syria almost 9,000 years ago were very different from the ones Pliny (and we) were familiar with; careful selection has created the modern pistachio and made it more convenient to eat.

The tree itself is deciduous and grows up to 30 feet high. It’s a desert plant and needs hot summers to fruit successfully, although it is quite hardy and can withstand winter temperatures down to 14°F (-10°C). They don’t handle humidity as well though, and need good drainage – water around the roots will quickly lead to rot. In the USA they can be grown successfully in USDA hardiness zones 8 to 10, and they’re very tolerant of both drought and saline soil. They should be planted where they will get full sun for as much of the day as possible, and around 30 feet should be left between trees – they spread out, and if they’re overcrowded the crop will be much smaller. 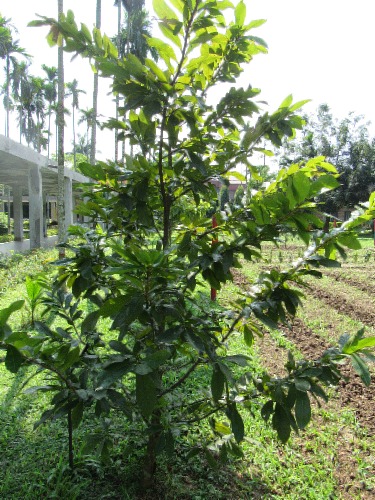 Pistachio trees should be planted in spring, to give them time to establish themselves through the summer. Planting holes should be as deep as the root ball and twice as wide. They don’t need a lot of irrigation compared to similar crops like almonds – deep watering once a month is adequate. If the leaves start to turn yellow before fall this usually means it’s getting too much water.

You should stop watering in October to encourage the tree to become dormant, which will help it survive the winter. Resume watering through the winter but reduce the quantity; this season is when they’re most vulnerable to root rot. The tree grows slowly and don’t need much fertilizer. Don’t fertilize at all in the first year, and afterwards apply a slow release type in spring. It’s usually seven or eight years before the tree produces its first crop of fruit, but it can take up to fifteen before it reaches full production.

One drawback of pistachios as a crop is that they’re vulnerable to several pests and diseases. Scale and stinkbugs are common problems; to protect trees they should be sprayed with a solution of insecticidal soap if any infestation appears. This can also harm beneficial insects though, so don’t overuse insecticides if you don’t have to. It will reduce the chances of successful fertilization.

Pistachios are unisex trees – each tree will have either male or female flowers, but not both. One male tree can successfully fertilize up to ten females and in orchards they’re usually planted in that ratio; it’s possible to grow a single female tree and graft a male branch to it. Insects will do the rest for you, carrying pollen from the male flowers to the rest of the tree. Flowers appear in early summer, and once they fade the fruit will begin to grow.

One slightly unusual feature of the pistachio is that it’s a biennial bearer; instead of a consistent growth of fruit it produces a small crop one year and a much larger one the next. The full crop from a mature tree can be over a hundred pounds of pistachios. These ripen slowly through the summer, with the drupe’s original green color slowly turning to a reddish-brown as it matures. By September or October the outer hull is starting to dry out and become loose. As the seed matures its hard outer shell will finally split open, which happens with a distinctive popping sound. This often splits the hull as well, which can allow insects and mold to infest the seed, so it’s vital to harvest pistachios quickly once they ripen. The easiest way to do this is to spread tarpaulins under the tree then simply shake the trunk – ripe drupes will fall off the branches. Commercial farmers often use mechanical agitators to shake their trees, allowing a very rapid harvest.

Growing Pistachios on Your Property

Pistachios are thought of as quite an exotic species, but if you have a suitable climate it’s perfectly possible to grow them in your yard. As long as they’re properly watered, adequately drained and kept free from pests you can expect to collect your first crop of delicious pistachios in seven or eight years, and they’ll taste even better because they come from your own trees.

Once they’ve been gathered, pistachios need to be hulled, although that’s a simple process because by now the outer layer of the drupe is very loose and comes off easily. If the hull has split naturally the seed needs to be inspected for signs of mold infection, because this can create dangerous aflatoxins. Farmers often discard these “early split” fruits for safety, but even so aflatoxin contamination often means whole batches of pistachios have to be destroyed.

In commercial production the seeds are then sorted by how open the shell is – more open shells are easier to remove, and often go to be roasted and packaged as snacks. The more closed ones can be mechanically shelled and processed into other food products.