An attractive and modest-sized tree native to the Mediterranean, the almond tree is renowned for the smooth, tasty and sweet nuts it produces. It’s been associated with humans for a long time; sometime before 3,000 BC someone figured out that the highly poisonous nut of the wild almond could be turned into a sweet and delicious crop. It isn’t clear when this happened, or even how, with many considering it to have happened by accident. Evidence suggests that the first edible almonds came from the eastern Mediterranean, specifically the Levant region, and the ancestors to these edible almonds still grow there.

It is not often there is a huge difference between wild and domesticated forms of edible plants, but in the case of the almond it really is striking. The wild almond is extremely poisonous; if the nut suffers any damage it releases hydrogen cyanide and munching your way through just a few small handfuls while relaxing with a book would put paid to any further reading, permanently.

Now you can find these tasty fruits growing throughout Africa and Europe, as well as a large and thriving industry in California. In fact, the majority of almonds found on supermarket shelves come from the farms of the state’s central valley, with Spain coming in as the second largest producer. The distinctive nut itself isn’t the only way almonds fit into our diet – almond milk and flour have become increasingly popular as healthy alternatives to dairy and gluten. Not bad for a plant that in its wild form could kill us but, thanks to what could have been a happy mistake by a farmer thousands of years ago, has come to be enjoyed the world over. How Do Almonds Grow?

As has already been said, almonds grow on trees, but this is still one of those topics that can cause much furor in quizzes and conversations. The answer is simple as are the reasons for the confusion in the first place.

Most people, when they think about nuts, conjure up images of peanuts in their oddly shaped cases (probably being eaten by a cartoon monkey). This is what causes the confusion, as peanuts – or groundnuts as they are also known – are not nuts at all; in fact they are legumes, related to peas and beans. The peanut plant is a small bush, with the nuts themselves growing in the soil beneath it in their pea-like pods. Most other nuts, however, grow on trees and almonds are no exception. Just to confuse things, though, they are not considered true nuts themselves. Things are never simple, are they?

In fact almonds are stone-fruits or drupes, and although they are “culinary nuts”, they are not botanical nuts. Culinary nuts are essentially anything found in a shell that happens to be edible whereas, as you might expect, botany is nowhere near so inclusive. For example, pistachios are also drupes rather than nuts. Confusingly other popular drupes include peaches (which are closely related to almonds), coffee, mangos, olives and much of the palm family. Cashew, macadamia, brazil, pine, pecan are all culinary nuts but none are true nuts – and some of them aren’t even drupes!

What is a Drupe and How is it Different From a True Nut? 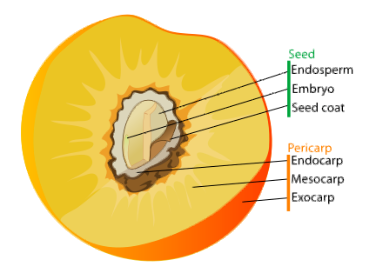 A drupe is a seed contained within a fleshy casing, that can be surrounded by either a skin or a tough fibrous shell. Think of a cherry and a coconut; both of these are drupes. Some drupes may be popped easily from their surroundings while others have to be carefully, or even forcefully removed. Many seeds rely on popping from their outer casings and being scattered on the wind to aid their dispersal, but drupes have a more difficult time.

Most of them are spread when animals eat the casing and discard the seed, or even swallow it whole to be deposited elsewhere in their feces. You might be wondering how either of these are possible with something like a coconut; this clever drupe is carried to its new home by the sea, bobbing along in its tough, durable husk.

A true nut is a far more simple structure than our fleshy-housed drupe because it’s simply a shell with the nut loose inside it. Examples are hazel, chestnut and beech.

Of course this only matters if you are a botanist, and really the most interesting group is the culinary nut. These are the ones we eat with so much enjoyment and it doesn’t matter whether they grow on a tree or under the ground. Who cares if it pops easily from the shell or needs the attentions of a hammer and nail, like a coconut? As for almonds they do grow on trees, and all that matters is that you don’t seek out the wild ones and feast on those!

thetreecenter.com has a Shopper Approved rating of 4.8/5 based on 26853 ratings and reviews