A big part of what makes trees attractive to many gardeners is the glorious display of colors they put on in fall. Deciduous trees are a sort of living calendar, keeping track of the seasons through their changing appearance. From the fresh green growth of spring, through summer’s shady foliage and fall’s firework display to the stark bare twigs of winter, they always signal the time of year.

Evergreens have their appeal too, though. Solid and unchanging, they ensure that your garden still has some visual interest in winter. They also provide valuable shelter for birds and small animals when the weather’s cold – there’s always a refuge in their foliage no matter what time of year. Many species are dense enough to act as windbreaks to spare your property from the worst impact of the wind. They can also have a spectacular appearance – some grow to an impressive size, or have interesting coloring.

It’s obvious how evergreens got their name; they keep their foliage all year round, unlike deciduous trees that shed theirs in fall. In fact evergreens lose their leaves too, but they do it steadily through the year instead of all at once. Being evergreen is an advantage to trees in some climates; it doesn’t make much sense for a tropical rainforest tree to shed its leaves in fall because there isn’t a cold winter coming, for example. Evergreens also do well in poor soil without many nutrients, because they can keep processing what food is available all year round. Deciduous trees become dormant when their leaves fall, and don’t wake up again until spring.

You can find evergreen trees in almost every region of the world and many species have become garden favorites. Not all evergreens are closely related – they come from many different families of tree, and there are evergreen members of largely deciduous families. There are several different types you’re likely to see, so here’s a handy guide to them. 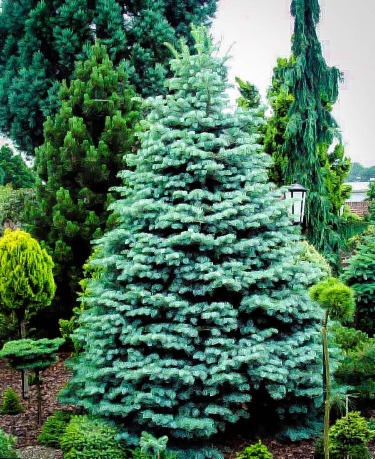 When most people think of evergreens they probably think of conifers. This group includes some of the most familiar varieties and some of them are culturally important – Christmas wouldn’t be the same without a decorated conifer in the corner of the living room, for example.

There are about 630 species of conifer and several dozen of them are popular garden trees. They range from dwarf firs to massive specimens like the Scots Pine, which can reach over 150 feet high. What sets conifers apart from other trees is the cones they grow – these are elaborate protective seed stores. Conifer leaves are very different from most deciduous trees. They take the form of needles or scales, which are less efficient than broad, flat leaves but withstand the weather better. The slender, robust leaves of northern conifers can survive freezing temperatures that would destroy the more fragile structure of a broad leaf.

At the same time they can also handle hot, dry weather better because they have less surface area for water to evaporate from. Wherever the climate is harsh you’re likely to find conifers. The shape of the trees themselves are often adapted to resist the weather – the classic cone shape of northern conifers helps them shed snow before it builds up enough to break their branches.

Conifers make up several related families, some of them containing dozens of species. Here are a few of the most common ones:

Because they can survive cold temperatures conifers are the most common evergreens in most of the central and northern United States. 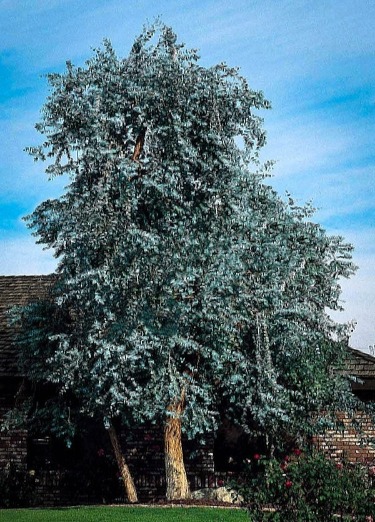 Because there’s no real winter in the tropics, species adapted for that climate don’t suffer from frost damage to their leaves, so there isn’t any reason for them to go dormant. Instead, by being evergreen, they can continue growing all year round. These trees aren’t a related group like the conifers – there’s a lot more variety. Often tropical evergreens are extremely tall, with long bare trunks and a broad, flattened crown.

Some of the common tropical hardwood families include:

Winters in most of the USA are too cold for tropical hardwoods, but there’s one exception. Florida contains several areas of hammock – diverse tropical forests with a dense canopy. Many of the larger trees in that canopy are evergreens. 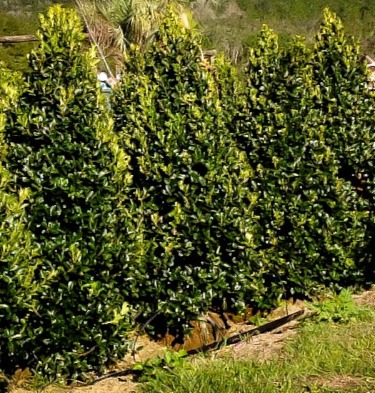 Some families mostly made up of deciduous trees also contain a few rogue evergreens. For example most oak trees are deciduous but a few species are known as live oaks because they stay green – and alive looking – all year round. Sometimes these have leaves that are smaller or adapted to resist the cold in some other way. Others seem to have evolved to suit a warmer local climate, where being evergreen is an advantage. There are some strange anomalies.

Many species of holly are deciduous but the most familiar one, European holly, is evergreen despite coming from a region with cold winters. One reason European holly became popular as a Christmas decoration is that Roman soldiers in northern Europe wanted to celebrate their New Year by decorating with the traditional green branches, easily found in Italy’s warmer climate. Holly was used as a substitute.

Families with evergreen members include:

There are also some evergreens that don’t really fit into any other category. One interesting example is the cycad family. These are found throughout the tropics, and up into Florida, and the fossil record shows that they haven’t changed much in at least 100 million years. They don’t use flowers to pollinate; their seeds are exposed and must be pollinated directly, usually by insects. Palms are evergreen too, and grow in many parts of the southern USA.

The best gardens use an imaginative mix of species, and evergreens have a place in that mix. They’re not as showy as most deciduous trees – their flowers are usually small and inconspicuous, and you won’t get those incredible fall colors – but they do provide a splash of green in the depths of winter. Plant a few hardy conifers and no matter how cold the weather there will always be something to look at when you admire the outdoors.