When I am sitting on the back porch, the last thing I want is prying neighborly eyes and loud noises from the distant highway. Privacy Screens are an effective way to manage sound and eyesores; though many people prefer fences, I enjoy the natural solitude and privacy of the Nellie Stevens Holly, a Holly shrub adapted to growing as a dense shrub. Nellie Stevens Hollies are perfect for privacy screens for many reasons; it diminishes noise and eyesores, provides natural shade, and brings bright colors to the yard throughout the year. Nellies are best planted 5 to 6 feet apart in order to create the living wall of natural splendor that these shrubs bring to the backyard.

Plant your Nellie Stevens Holly along a yard perimeter or property lines. I have seen Nellies used effectively as garden hedges, property markers, and even as separators within a yard. My grandfather planted the Nellie Stevens Holly along a line in the center of the backyard, to mark the end of the mowed greens and the beginning of a small meadow. Sunlight – Plant in a partially sunny area with some access to afternoon shade.

Soil – Plant in well-drained, moist soil that is not overly wet.

Water – Water every once a week for the first six months, and then during extensive dry spells after that.

Pruning – Pruning can be done throughout the year, with the exception of spring. If only pruning once, aim for late summer.

The Best Places to Plant a Nellie Stevens Holly These Holly shrubs are somewhat drought resistant, meaning the Holly can survive short dry spells. Nor do these shrubs require much, if any, pruning. Nellie Stevens Hollies thrive on neglect. Simply plant the saplings acquired from The Tree Center 5 to 6 feet apart in a single row to develop a dense privacy screen. 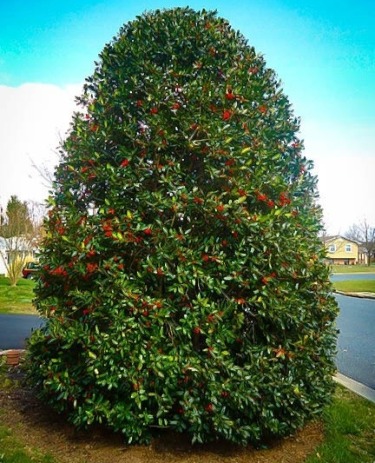 Caring for Your Nellie Stevens Holly

Nellie Stevens Holly is a hardy tree. With proper care, these evergreen Holly trees survive well in rural, suburban, or urban areas. Several states list Nellie Stevens Hollies on approved urban planting lists, as this Holly is a fast-growing vegetative screen, which is both drought tolerant and pollutant tolerant.

When it comes to caring for your Nellie Stevens Holly, water and sun exposure are the most important considerations. Nellie Stevens Hollies prefer partial shade, with some light morning and early afternoon sun followed by shade from the hottest mid-day and late afternoon rays. These Hollies are one of the few evergreens that will do well with heavy shade, and they are enjoyed for this reason as vegetative screens with already standing trees or plant-life.

Water is the other point of focus when planting and caring for the Nellie Stevens Holly. These Hollies grow well in USDA Hardiness Zones 6 through 9, which excludes the far northeast (New York and above), though the east coast up to New Hampshire is still welcoming. It also excludes areas west of Ohio, north of Kansas, and east of western Idaho and Nevada. If planting the Nellie Stevens Holly the drier regions of the southwest or mid-west, consider irrigation systems. Nellies require moderate water amounts, though they can survive mild droughts with relative ease. If droughts or extensive spells of heat are prevalent in your region, simply ensure the tree receives watering at least once a week. Irrigative systems work well as they will typically conserve water while still ensuring the success of the Holly tree.

Variants of the Nellie Stevens Holly

Nellie Stevens Hollies are part of the Ilex genus, a group of between 400 and 600 shrubs and trees. Nellie Stevens Holly is itself a specific hybrid within the family, a cross between a Chinese Holly and English Holly. There are hundreds of other Hollies to choose from within the Aquifoliaceae family; however, none will bring you the specific benefits of the Nellie. If a Nellie Stevens Holly isn’t your cup of tea, the American Holly has been making a resurgence of late and offers similar benefits.