While we enjoy the last balmy days of summer, it is hard to think of the winter to come, but it will come, and our once-green gardens will be a lot barer when it does. You might live in the cold north-east, where the winter garden is mostly seen through windows from the warmth inside, or in a milder area where walking around or even sitting in the garden in winter can be an option. Wherever you are, you want something of interest to look at. So once the last leaves of fall have dropped from the trees, and the evergreens have become somber sentinels, where can we get some color from? What shrubs or trees can bring interest and beauty, at least of a more muted, wintery kind? This is the perfect time of year to plant for the coming winter – you will be glad you did when you see how much more interesting your garden has become.

Putting evergreens aside for a moment, there are two classic ways to bring color to a wintery garden. The first is with colored bark, planting some of the many shrubs with red or yellow twigs in winter. The second is with persistent berries and fruits, that will last for most of the winter months. 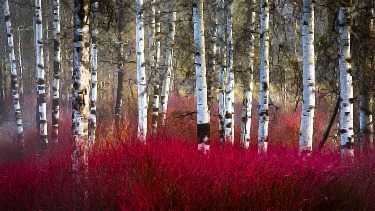 There are two very distinct kinds of dogwoods – the small trees with white or pink ‘flowers’ in spring, and the smaller shrubs that are notable chiefly for the color of their twigs in winter. These are mostly shrubs native to America – an added bonus – and these easily-grown, and very hardy plants are the simplest and most versatile way to add color in winter.

The red-twig dogwood (Cornus sericea) grows in damp places all through the colder parts of the USA, and it is especially useful for its ability to grow in cold areas – as cold as zone 3. Although wild plants do have red winter twigs, forms with much stronger color have been selected, and these are the best garden choices. Some of the brightest coloring is found in the Cardinal Red Dogwood, a selected form that that will grow well over 6 feet tall and spread to form a large clump in the background of your garden beds.

Many gardeners prefer to prune this shrub regularly – every couple of years. Not only does that keep it more compact, so it fits better into a smaller garden, but it also encourages longer new shoots. These are the ones with bright-red bark, so you produce a much brighter display this way. In milder areas you can cut it back to the ground every second year, in late winter. In colder areas it is best to remove older branches every second year, leaving a framework of the previous year each time.

If you have a smaller garden and don’t want to do a lot of regular pruning, choose the variety ‘Arctic Fire’, which only grow 3 to 4 feet tall and wide. For a great contrast with those red twigs, plant the Yellow Twig Dogwood (called ‘Flaviramea’), either alone, or mixed among red ones. Its bright yellow twigs stand out too, and make the red ones look even brighter. Although these shrubs will grow well in light shade, you will get the strongest winter color by planting them in full sun. 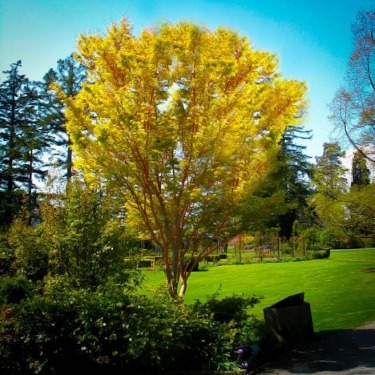 We usually think of Japanese Maple Trees as features of spring and fall, with their bright foliage, but some bring lots of winter interest, and are perfect if you want something taller than those dogwoods. The Coral Bark Japanese Maple, a variety called ‘Sango-Kaku’, is a classic, a fast-growing small tree that can in time reach 20 feet or more.

After a beautiful fall display of pure yellow leaves, these fall to reveal coral-red bark on all the younger branches. Again, the color is strongest in plants growing in full sun, but don’t worry, because this is also one of the most sun-resistant of the Japanese Maples, as well as a top choice for hot areas. In the hottest places some shade from afternoon sun will protect the foliage without reducing that winter color.

Winter Interest from Berries and Fruits 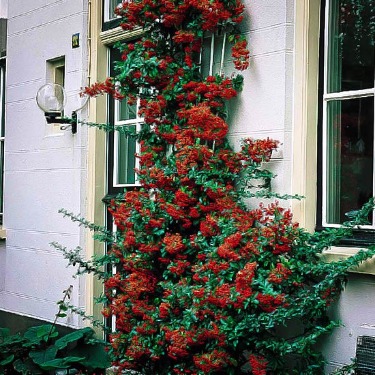 Turning to berries, there are lots of choices, but one of the easiest and least demanding, as well as one of the most spectacular, is the Firethorn bush. This versatile evergreen shrub is hardy from zone 5 to 8, so it can be grown almost anywhere. As well, it can be left to grow naturally into an arching shrub that will reach 10 feet tall, or it can be trimmed into a hedge, or tied in to a wall, which is an especially attractive way to grow it.

Covered in white blossoms in spring, this shrub has bright orange-red berries that last for months into winter, sometimes still with a few left when blossoms come again. Because this plant can develop the disease Fire-blight, it is best to choose a disease-resistant selected form, and one of the best is the Mohave Pyracantha. This hybrid was developed by the National Arboretum in Washington DC, who have produced many great garden plants, so you are assured of its quality.

If you live in a hotter, drier part of the country, Victory Pyracantha is a hybrid bred specially to resist heat and drought. Its berries are redder, and it has all the virtues of this group, as well as making an intruder-proof fence, with its sharp thorns. 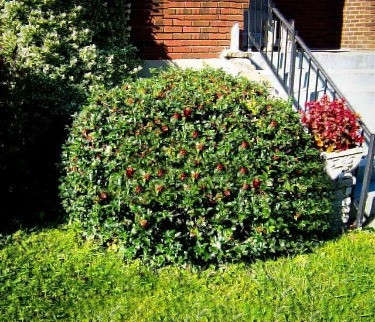 The red winter berries of holly bushes are almost too well-known to mention. But they are usually large shrubs, and at least two are needed for berries with almost all of them. So in a smaller garden there is a tendency to ignore them. As well, most do best in zone 6, so in colder areas they are not an option.

If this is why you haven’t grown them, think again. The Blue Holly series (Ilex x meserveae) is a hybrid group created specifically for colder conditions. These are hollies that are hardy into zone 4, with rich blue-green leaves all year round. The most popular and reliable are ‘Blue Princess’, for berries, and ‘Blue Prince’ as her partner. Clever nursery growers put them together in a Combo, so that they grow together as one bush, pollinating themselves, and staying small enough for even a small garden. The bright-red berries will cheer up the winter season. For a larger planting, such as a hedge, plant one ‘Blue Prince’ for every 4 to 5 ‘Blue Princess’ bushes, to get the best berry crop.