It has not been all that many years since grass had only one place in the garden – green and mowed weekly on the lawn. It took some adventurous growers and garden designers to open our eyes to the beauty of grass – not short and green, but tall and golden, ornamented with striking plumes flowers and seeds. The increased interest in grasses coincided with a fall in the time most people had to garden, so gone were the time-consuming roses and perennials, to be replaced by plants that took care of themselves for the most part – flowering shrubs and ornamental forms of grass.

After the easy profusion of spring, grasses start to come into their own. By late summer and throughout fall they look spectacular, and many look great through much of the winter too. They rarely if ever have pests or diseases, and if you choose wisely – more of that later – they are well-behaved parts of your garden that ask for little but give a lot. If you are not already won over to gardening with ornamental grasses, then read on. If you are, read on anyway, as you are sure to pick up some helpful ideas to use them more effectively.

Some gardeners are scared to grow grasses in their gardens, because they have bad memories form the past of plants that rapidly proceeded to take over large parts of their or some neighbor’s garden, and that required enormous effort to remove. There was a time when we didn’t pay enough attention to the most important division among grasses, between those that spread outwards by underground roots, and those that stay in a tidy clump, growing fatter, but staying put. If you have a small or medium-sized garden, there is one simple rule – grow only clump-forming grasses. Read the plant descriptions carefully, and make sure they are described as clump-forming, or non-spreading. The spreading grasses have a place too, and many are beautiful, but only in a large garden, or a semi-wild one, is there room to let the, do their thing harmlessly.

Where to Use Ornamental Grasses in Your Garden

The temptation is to say ‘everywhere’, but that would not really answer the question. Most grasses like sun, so any sunny part of your garden is ideal. In shady areas the grass relatives called Sedges will often thrive, especially in damp shade. They look a lot like grasses, although most are not very tall. Other grass-like plants, like Turf Lily (Liriope) are terrific for that grassy effect in shade too, although they do best in warmer parts of the country.

There are several ways to make the most of ornamental grasses in your garden – here are some ideas:

Plant them between flowering shrubs, for contrast in form, and to make your beds look much more interesting over many seasons.

Plant shorter ones as a border, to tie your beds together, and bring unity to a mixed collection of plants.

Use larger ones to fill awkward corners of your garden, giving height in a couple of seasons, instead of waiting years for shrubs to grow.

Create a border only of grasses. You will be amazed at how wonderful it looks, changing over the seasons, and rustling in the breezes.

Use them as the center-piece in planters, surrounded by trailing and flowering plants. They give quick height, and can be left in place for next year, saving work.

Most grasses have easy requirements, but there are two other habits that are worth considering. Some grasses are ‘cool-season’, which means they make most of their growth in spring and early summer. These are great choices in cooler parts of the country, and also for some early display. However, they will often start to look ‘tired’ by the middle of summer, and they may need cutting back.

Other grasses are ‘warm-season’, and may look dead all through early spring, before jumping into growth when the heat arrives, and looking spectacular through late summer and fall. One tip with warm-season grasses, never move or divide them when they are not sprouting – you can easily kill them that way. If you live in a cold area, some warm-season grasses will only flower right at the end of summer, or even not at all, so choose ones with especially ornamental foliage.

Grasses mostly need well-drained soil, and many are very drought-resistant once established, so they can be great choices for xeric gardens. Others like moisture, so choose the ones that suit your garden conditions.

The Best Ornamental Grasses to Grow 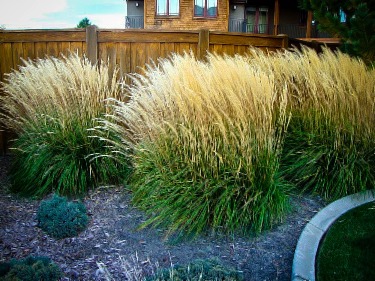 Karl Foerster Feather Reed Grass is a top-choice for every gardener is cooler areas, because this cool-season grass grows well even in zone 3. It’s also one of the few grasses that grows well in damp or wet soil, so if you have a stream, or a bed around a pond, it’s got to be at the top of your list.

Once established it is moderately drought-resistant, and it grows well in ordinary soil too. With a strong upright form it makes a perfect vertical accent anywhere, and it won’t spread, not even from seed, as this hybrid grass is sterile. Calamagrostis × acutiflora ‘Karl Foerster’, is its botanical name. 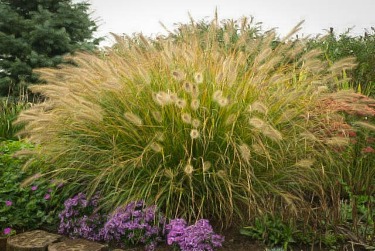 Fountain Grass (Pennisetum alopecuroides) is probably the most popular of all grasses, and no wonder, with all its virtues. Of medium size – just 2 to 3 feet tall – it fits into any garden. It never spreads from its neat clump, and quickly forms a beautiful arching mound of very narrow leaves, looking just like the fountain of its name.

Fluffy flower heads complete the picture, and they cut well for vases in the house all winter long. No garden should be without this easy-to-grow beauty, or some of its varieties, of which there are a number. Top pick must go to the variety called ‘Fireworks’, with amazing foliage that glows burgundy, pink and purple. It makes a striking accent, and even the seed heads are pink. A real winner you can’t be without. 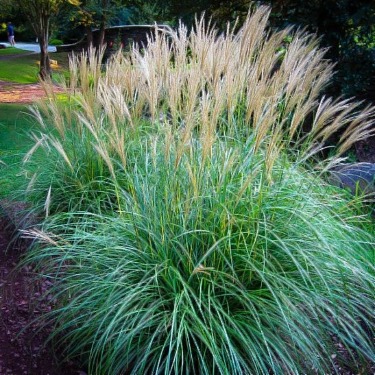 Maiden Grass is a large group of wonderful warm-season grasses, that are spectacular in late summer and throughout the fall. Plant them among early blooming plants, or among spring bulbs, so you don’t have bare spaces in the early part of the season. When buying Maiden Grass, make sure you choose the species Miscanthus sinensis, as it is clump forming. Other species can be spreading and invasive, so beware.

With foliage to 5 feet, and flower plumes up to 8 feet tall, this is a larger grass for the background, or for larger spaces. It grows rapidly too, so it’s a terrific way to get height in a couple of years in a new garden, while the trees and shrubs grow in. If it is too tall for your garden, then choose the variety ‘Adagio’, which keeps to a more modest 3 to 5 feet tall – perfect for your small garden. Maiden Grasses are also salt and drought resistant, so if you have a beach cottage, it’s the perfect choice. Once you grow this grass you won’t be able to live without it.