Filled with nutrients and minerals, sap is the blood of a tree. It carries energy out into the branches when new buds are forming in spring-time. It comes in many forms; it can be that stuff that gets on your clothes and sticks to your car, or it might be perfect drizzled over pancakes. And if those things weren’t interesting enough for this curious substance, it has also been the subject of shocking photographs that swept the world thanks to disease.

There are a few reasons why you might come into contact with sap, with some being desirable and some not, but what is it and what does it do for the tree?

There are two separate substances usually lumped together under the label of sap; these are xylem and phloem. Xylem transports water, minerals and hormones from the bottom to the top of the tree in a long string formation. Each year the xylem channels die off and new ones are produced. When you fell a tree and are faced with those wonderful rings you are seeing the old xylem channels, one ring for each year of life.

Phloem, however, is the sticky sugary stuff we tend to come into contact with whether by accident or on purpose. This is made up of the sugars created by photosynthesis, which is then fed back into the tree and leaves as much-needed food during the growth period. 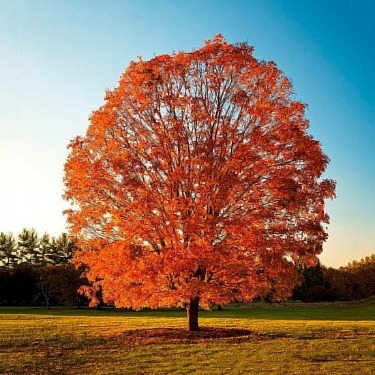 One very popular tree is the sugar maple (Acer saccarum). Its sap has a sugar content of up to 2% and they make a lot of it; it is tapped in late winter and early spring, with a healthy, good-sized tree producing as much as 15 gallons of heavenly sweetness. The sugar maple is the most prolific for sap production, but every maple produces edible sap with varying degrees of sweetness. Much is not commercially viable due to the lower yields but they are still commonly used for domestic purposes. In Korea the Gorosoe (Acer mono) is the most common source of sap; traditionally it’s used ‘raw’ as a hot beverage rather than boiled down into syrup.

As well as maples there are a few other trees that produce edible sap. The white walnut (Juglans cinerea), black walnut (Juglans nigra), heartnut (Juglans ailantifolia) and the English walnut (Juglans regia) will all yield tasty sap, with the heartnut boasting sugar levels comparable to the sugar and black maples. The sap of many birches is also very nutritious – while it’s low on sugar it’s a great source of minerals and natural antioxidants.

Why Do Trees Produce Sap? 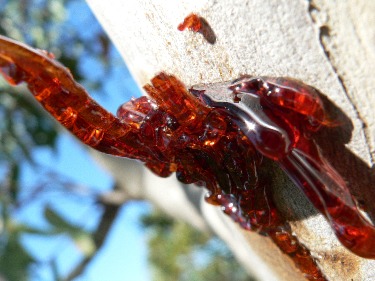 The aforementioned uses of tree sap are undoubtedly positive; however our other interactions with it might not be so much fun. Often the reason we encounter sap on the outside of a tree is because something is wrong. Leaking sap on the bark can be a sign of disease, pests or damage. A common pest that causes damage to trees, and forces protective action, is the bark beetle. These burrow into the tree to lay their eggs under the bark layer. When the eggs hatch the larvae burrow start to carve out a network of deep burrows, and it usually requires chemical treatment to save the tree. However the tree’s own sap can often serve as an effective defense mechanism – the holes made by the burrowing adult beetle fill up with the sticky fluid, which can prevent it laying the eggs and even sometimes trap it.

Indirectly exposed sap can result in various mildews, as there are insects such as the mealybug and aphid which feed on the substance. They, in turn, exude their own sticky fluid known as honeydew and the presence of this can increase the occurrence of sooty mildew.

There is one particular showing of sap that created many stories of impending doom and apocalypse, however. Presented with images of trees leaking what appeared to be blood, the internet went into meltdown with fantastical stories about what might be causing it. A quick search of Google for “bleeding trees” will pull up some fascinating images if you have not seen them already, and there are some quite graphic shots of the stuff pumping forcibly from trees. But was there some sinister reason for these eruptions of deep red sap? Of course, much like blood pumps harder round our bodies as we exert ourselves, as does tree sap. If these trees are cut or damaged at the height of the sap production it can appear in spurts from the injury, and some species are well known as “bleeders”. It’s worth looking at the images if you ever need a reminder of just how surprising nature can be.

Removing Sap From Clothes, Skin, Cars and Other Items

One common complaint about sap is its famed ability to stick to things we’d rather not have it stick to. You can get covered in sap while doing yard work, exploring in the woods or even decorating the Christmas tree, and it’s always best to clean it up before it has a chance to harden. If caught while still sticky it can usually be removed without too much trouble. Skin and hair are two areas where contact can be tricky. Rub sticky skin with nail varnish remover to break the bond, then wash it away gently with warm soapy water. In hair your first reaction might be to chop it straight out, but that isn’t really necessary. Treat it like bubble-gum – coat the sap with peanut butter, massage it loose then wash your hair as normal.

Rubbing alcohol is great for removing sap from fabric; apply it to the affected area to loosen and remove the substance, then put the item through a warm wash.

Another way to utilize nail varnish remover is when sap drips on your car – something many of us have experienced. Do not apply directly to the paintwork, just soak some cotton wool and work it gently into the offending sap before washing your vehicle as usual. If the idea of applying nail varnish remover makes you uncomfortable another great option is WD-40, which is very unlikely to react with the paintwork at all. Once it has achieved its aim, simply wash it away with a solution of water and vinegar.

From your point of view sap can either be a nuisance or a delicious treat, but to your trees it’s vital. Look out for unusual leaks and consider sap activity when deciding when to trim, and if you have a maple on your property read up on how to tap it. If you have trees you’re going to have sap, so make the most of it!