There are hundreds of ornamental trees to choose from when planting either accent trees or colorful tree rows, yet none is quite like the Cleveland Pear Tree. This stunning oval shaped tree reaches heights moderate between 30 and 40 feet tall, and its uniform shape exudes elegance with minimal effort. Many gardeners and landscapers may be familiar with the Bradford Pear Tree; the Cleveland Pear Tree is an improved cultivar. Bradford Pear Trees are notoriously weak, and these trees are easily damaged by cold weather and large spreads. The Cleveland Pear’s more compacted shape helps it to avoid these common problems.

Cleveland Pear Trees are notable for a variety of reasons. One of the most noticeable factors stands out right away – the color. Pure white springtime blossoms will delight every eye passing by, while the variety of plums, brandy reds, and mellow golden yellows of autumn will also paint that season. Besides this, Cleveland Pear Trees are easy to care for once established. 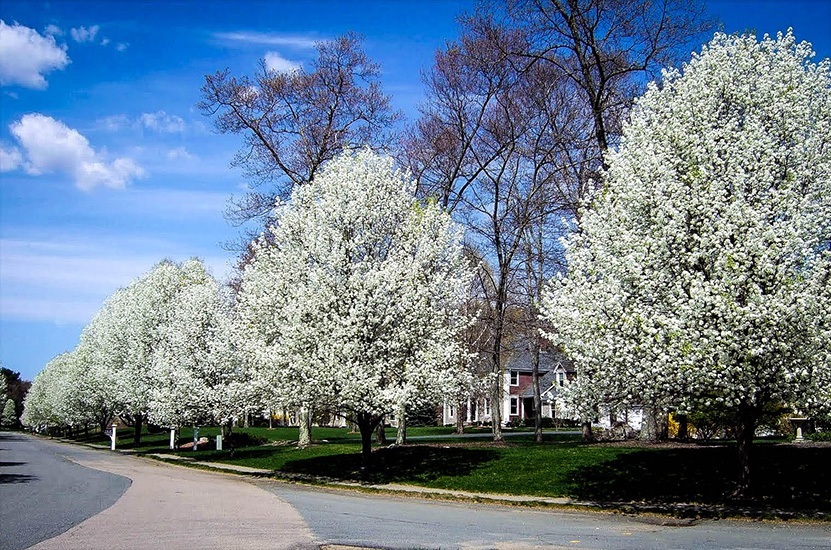 Despite these concerns, the Cleveland Pear Tree is a great choice for landscapers looking for a stunning accent tree, which coupled with fast-growth, will quickly add character to the planting location, either as an individual ornamental or lining the edges of a pathway.

Sunlight – Plant in a full sun location. Cleveland Pear Trees are not tolerant of heavy shade, though minimal afternoon shade in drier locations can be helpful.

Soil – Plant in well-drained, moist soil that is not overly wet. Although adaptable to many soil types, Cleveland Pear Trees prefer well-draining loam.

Pruning – Pruning is not recommended; if landscapers do feel it is required, simply remove dead branches and suckers in the fall.

The Best Places to Plant the Cleveland Pear Tree 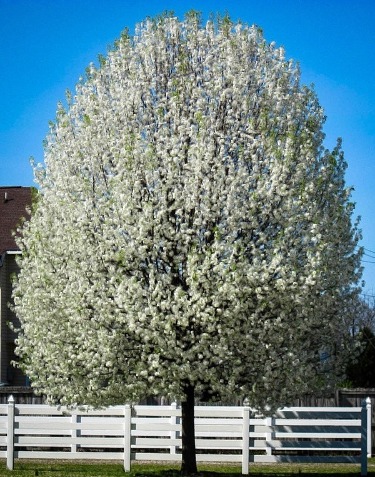 Cleveland Pear Trees are notably easy-to-grow, unlike many other ornamental trees, which are often quite picky. The first year is the most tentative. With proper planting and care, the Cleveland Pear Tree will quickly become well-established and requiring of minimal effort.

Plant the Cleveland Pear in full sun, as the sapling and mature tree is intolerant of shade. These ornamentals can be beautiful accent trees, drawing the eye to an individual focal point in a garden landscape. On the other hand, many landscapers choose to line entryways or driveways with rows of Cleveland Pear Trees. If you choose to plant these pear trees in rows, make sure the planting holes are about 15 feet apart, as the Cleveland Pear Tree’s mature spread will be between 15 and 20 feet.

Finally, Cleveland Pear Trees are a cultivar of the Callery pear, a species originally native to China and Vietnam. There are several other cultivars of this species, and they can cross-pollinate. If you have planted other Callery pears, such the Bradford Pear and Aristocrat, proceed cautiously with the Cleveland Pear, as these trees may hybridize after birds assist in fruit pollination. The thorny thickets produced by this hybridization can be difficult to manage.

The Cleveland Pear Tree grows uniformly, so even if you choose to plant rows of these, most will grow evenly to reach between 30 and 40 feet tall and 15 and 20 feet wide. Unlike many other ornamentals, Cleveland Pears have a fast growth rate. Expect between 3 and 5 feet of new growth each season. This prized quality makes the Cleveland Pear Tree a popular choice among landscapers and homeowners. 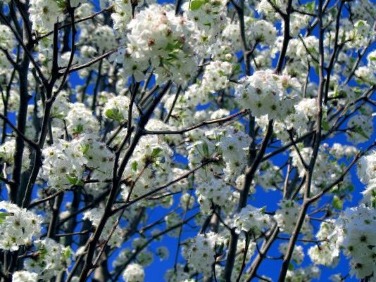 Finally, Callery Pear Trees do have a distinctive smell, which is not always described pleasantly. An organic chlorine smell may permeate the area, so be sure to use other lovely-smelling tree or plant varieties in nearby proximity to help cover any possible smells. 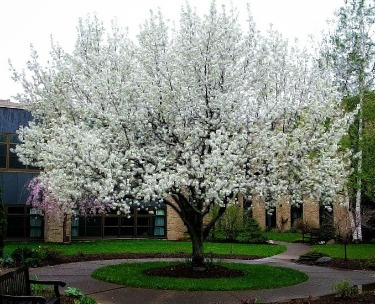 The Cleveland Pear is known for its year-round enjoyment. In spring, the pear tree’s flowers blossom suddenly, covering the gray branches with thousands of small white blossoms bundled into groups on every bough. Summer brings glossy, oval shaped green leaves. The flowers may produce small fruits, no larger than an inch in diameter. These fruits are not edible.

– Pear Wood is prized for its fine textures. As such, it is used in woodworking and many woodwind instruments.

– Callery Pear Trees are non-native invasive. This means that they do not originate in the United States, and they can damage the native ecosystem with overgrowth. Cleveland Pear Trees can still be planted, just be careful before planting near other Callery pears.

– Cleveland Pear Trees are pollutant-tolerant and immune to most diseases and pests that normally affect flowering ornamentals.

– Natural-based mulches are helpful when planting Cleveland Pear Trees; simply place a 3-inch layer of mulch at the base of the Cleveland Pear.
[/sociallocker]