Azaleas belong to the Rhododendron family, where both evergreen and deciduous subsets exist. The colorful shrubs grow best in the Southeastern regions of the United States, though they can be successful in USDA Hardiness Zones 5 through 10. Most Azalea Shrubs peak between 3 and 5 feet in height, making them a compact choice for smaller gardens. Due to their vibrant, showy funnel-shaped blooms, many landscapers and gardeners choose to plant Azaleas as accent garden pieces against the backdrop of acidic-loving evergreens such as pine trees.

Although Azaleas do well as stand-alone shrubs, they also grow well in rows planted between 3 and 4 feet apart. Low maintenance pruning is minimally required. With proper location planting and soil checks, the Azalea will delight gardeners with its three-season blooms and easy growth. Unlike their genus’ namesake, Rhododendrons, Azaleas are typically smaller and require less constant maintenance. Azaleas are also less likely to grow uncontrolled.

It is important to research any species carefully before planting. Azaleas, especially, have specific requirements surrounding soil pH and shade resources. Once planted in the right location, Azaleas typically require minimal additional effort beyond modest pruning and soil amendment. Read the quick facts below to determine if the Azalea may be the right choice for the given planting location before reading the following sections in detail.

Special Directions for the West Coast

Heat Care: In areas of excessive sun stress, such as Southern California or valley areas, shade may be required. At least some afternoon shade is recommended to protect plants from the hot, drying, afternoon sun. In areas with hot, dry, summer winds, try to plant your Encore® Azalea where it will be sheltered from these winds. During the drier, summer months, be sure to provide adequate water, especially while your new Encore Azaleas are becoming established.

Exposure: While full sun is acceptable in the Pacific Northwest, do your best to provide your Encore® Azalea with at least 6-8 hours of sunlight per day. Providing your azaleas with the sunlight they need will help ensure the best conditions for optimal blooms. If your Encore® Azalea isn’t blooming in multiple seasons, it might be a result of the plants being planted in too much shade. If this is the case, try moving the plants to a sunnier location. Because Encore® Azaleas planted in the Northwest area of the U.S. may receive even less sunlight than those growing in other climates, you will want to choose sunnier areas that are protected from harsh, northerly, winter winds.

Sun Exposure: Encore® Azalea perform best in full sun to partial shade. A minimum of four to six hours of direct sunlight per day is required for proper blooms. Care must be taken to prevent exposure to drought or other heat related stress conditions associated with full sun exposure. Encore® Azaleas are versatile and will adapt in a partial shade situation, preferably an afternoon shade. However, too shady an area can result in skipped or significantly reduced bloom cycles.

Encore® Azaleas fare well in a site that faces north or east. The best sites are wooded and located next to a building, which affords azaleas ample morning light while protecting them from the harsh afternoon sun.

How to Buy Encore® Azaleas

Many Azaleas are grown from cuttings, although some species can germinate from seeds. Regardless, initial stages of growth determine future success. The Tree Center ensures this proper early care, so that with proper planting and care in later stages of life, the Azalea Shrub will continue to demonstrate success. Buying Azaleas from The Tree Center is an investment in the future success of the garden.

How to Plant Azalea Shrubs

When to Plant: Plant in early to mid-spring, preferably during cooler weather. 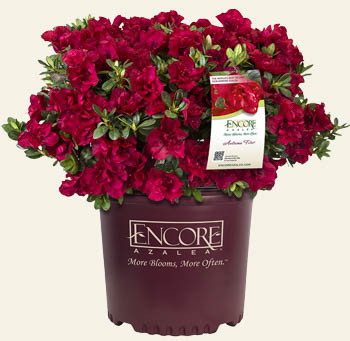 Good research is the first step in any successful planting endeavor. Not all plants, both trees and shrubs, grow well in all places. Azaleas in particular are picky, despite being found in a diverse set of USDA Hardiness Zones, 5 through 10. Regardless of the hardiness zone, Azaleas require dappled shade, moderate watering, and proper soil. Once the Azalea Shrub has been determined to be the best-suited flowering shrub for the given planting location, order one or more from The Tree Center.

If using mulch, layer it now. Then, water the mulch immediately.

Soil is the foundation of any tree or shrub’s success. Although Azaleas can be adaptable to a variety of soils, they do have specific requirements, especially with regards to pH and drainage. Azaleas prefer soil with a pH of 5.5, or between 5.0 and 6.0. This acidic quality in the soil is best determined through a pH testing of the soil. If the soil is not acidic enough, adding sulfur to the soil can compensate for the deficiency. Additionally, Azaleas require moderate amounts of nitrogen. Fertilizers may be necessary to compensate for any nutrient deficiency.

Azaleas also require well-draining soil. Soils are categorized based on their grain size. Clay and silt soils have small particles that block the movement of air and water. These are not conducive to Azalea growth. Neither are sandy soils, which often drain water and air too quickly. Loamy soils, which are comprised of a variety of particle sizes, are best. Amending the soil prior to planting is one way to combat clay or sand-based soils. Simply till in compost or pine-based mulch to add to the soil composition. Additionally, raised beds can be beneficial as it is easier to manage drainage in this kind of container, filled with the best loam. Potting Azaleas will also compensate for poor soil.

As long as Azaleas are planted in dappled shade, watering should be of minimal concern. Simply water the Azaleas once a week in lieu of rain. Azaleas do not only intake water from their roots, but they also intake water through their leaves. As such, drip irrigation systems are to be discouraged. Overhead watering systems work best, as these will ensure both leaves and roots receive adequate and uniform amounts of water.

Mulch and fertilizer can be beneficial when planting Azaleas. These act as tools to help in conserving water, boosting blooms and leaves, and increasing the nutrient matter of the soil. Mulch is helpful for Azaleas. Since Azaleas have specific soil requirements, pine chips, pine bark, or sawdust mulches can be helpful in both amending pH content of soil and increasing water absorption.

Fertilizers are not always necessary with Azaleas, and it is possible to over-fertilize these shrubs. If the use of fertilizer is required, either due to soil incompatibility or gardener preference, simply choose an acid-forming fertilizer (e.g. cottonseed meal or commercial azalea/blueberry fertilizers) and apply in spring just after blooming.

Azalea shrubs come in a variety of colors. Many species have blooms that arrive in spring and linger through till autumn, providing three-season colors. Shade-tolerant, most Azaleas grow best in shaded areas. Azaleas also contain andromedotoxins in its leaves and nectar, making it highly toxic. In fact, Azaleas delivered in a black vase were once considered a death threat. Today, Azaleas are celebrated in festivals all over the world for their beauty. Japan, Korea, Hong Kong, and the United States have the most famous festivals.

For hundreds of years, people have been developing unique cultivars of the Azalea, leading to over 10,000 individual cultivars. There are several species that grow well in the United States. Those best-suited to growth in the USDA Hardiness Zones 5 through 10 are listed below:

Hardy in USDA Hardiness Zones 6 through 10, the Autumn Embers Encore® Azalea displays brilliant red blossoms for three seasons. These shrubs reach between 3 and 4 feet tall and 3 and 4 feet wide. Mild pruning may be necessary in mid-autumn, after the last blossoms have fades.

The Autumn Debutante Encore® Azalea displays pink to fuchsia blossoms for three seasons, and it reaches between 3 and 4 feet tall and 3 and 4 feet wide. Hardy in USDA Hardiness Zones 6 through 10, the Debutante Azalea is easy to grow and requires minimal fertilizer.

The royal purples of the Autumn Royalty Encore® Azalea bloom in all three seasons. Reaching heights between 4 and 5 feet tall and 4 and 5 feet wide, the Royalty Azalea is one of the largest Azalea shrubs. It is hardy in USDA Hardiness Zones 6 through 10.

So named for its large pink, white, and red blossoms, which sometimes measure 4 inches in diameter, the Conversation Piece Azalea is a popular container Azalea. Hardy in USDA Hardiness Zones 6 through 9, this Azalea is usually between 2 and 3 feet tall and 2 and 3 feet wide.

This Azalea displays white blossoms for two full seasons, though the specific species is an evergreen. Hardy in USDA Hardiness Zones 5 through 8, the Delaware Valley White Azalea reaches between 3 and 4 feet tall.

Azalea Shrubs are popular for their vibrant colors and minimal daily maintenance. These shrubs grow well in containers, though they are often chosen in warmer United States’ locations to act as accent garden plants. Minimal pruning is needed to receive delightful blossoms for several seasons.

Most Azaleas are not prone to severe onslaughts of disease or pest infestation. Azaleas are more prone to drying out, especially if they are planted in full sun exposure locations. Watering Azaleas is important, and they will die if not cared for properly. Additionally, Azaleas require special nutrient balances. Low nitrogen, alkaline-heavy soils that do not drain well will also damage the Azalea. In addition to this, Azalea leafy gall and root rot may also impact Azalea growth.

thetreecenter.com has a Shopper Approved rating of 4.7/5 based on 12519 ratings and reviews