There are many, often unrelated, trees that go by the name ash, but usually it means the 60 or so members of the genus Fraxinus. These are found throughout most of the northern hemisphere from northern Europe and Canada down to subtropical regions of North Africa. There’s huge variety among these trees; most are deciduous but some of the southern species are evergreen. In the wild many species of ash can grow to 80 feet or more; cultivated ones are usually smaller but, planted in moist soil in a spot that gets full sunlight, they will still grow into imposing trees. The wood of the ash is extremely tough and it’s been important throughout human history for making tools and weapons. It also has a place in folklore, from the ancient Greeks to the Druids and Norsemen.

Ash trees can live for hundreds of years, so before planting one it’s important that you decide on the right species and find the ideal spot to plant it. Once established the tree will need very little work, but you’ll get much better results if you carefully select what you’re going to plant and where you’re going to plant it. Here are the essentials you need to know before buying an ash tree.

How to Buy Ash Trees

An ash tree that has been well looked after in the early part of its life will be healthier, less stressed and less vulnerable to pest and disease; to ensure you get a well-cared for tree it’s best to buy from a reputable nursery like The Tree Center. Once you’ve chosen the species of ash you want, and worked out where you’re going to plant it, order your new tree from us.

How to Plant Ash Trees

Sun: Plant in full sun. It can tolerate light shade, but if possible avoid this.

Water: Water newly planted trees thoroughly. Then water weekly for the first growing season, and after that whenever the soil is dry.

When to plant: An ash tree can be planted all year round but spring, after the last frost, is the best time. 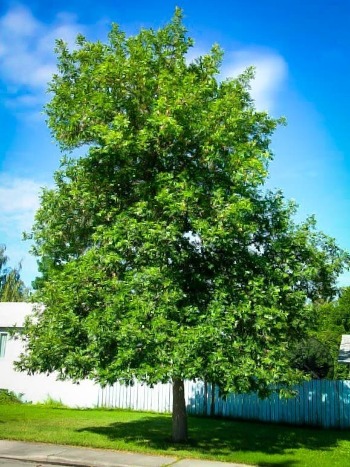 Now, let’s go over how to give yourself the best chance of success when planting an ash tree. First, choose the most suitable species of ash based on your local climate and soil type, and the space you have in your garden. Order your young tree from The tree Center.

When your ash tree arrives, prepare a hole for planting. It’s important to get this right, as a well-prepared hole will get your tree off to a good start and maximize its chances of establishing itself quickly. Look at the root ball, then dig a hole around twice as wide as it and about a foot deeper than the ball is high. Then dig a shallow moat just outside the edge of the hole. Fill the bottom of the hole about a foot deep with potting soil.

Stand the tree upright in the center of the hole – it’s handy to have help here – and fill in with soil. Don’t tamp it down too hard; loose soil will help the tree establish its root system quickly. You can fill the hole slightly above the surrounding ground; it will settle. Once it’s filled water lightly, then fill the moat with water and let it soak in slowly.

Most trees will grow best in certain types of soil and the ash is no exception. This tree prefers medium to heavy soils made up of small particles that retain water – clay or loam are perfect. It’s best if it’s also organically rich and at least slightly acidic; a pH of 4 to 7 is ideal. It won’t tolerate dry soil, so avoid areas that are very well drained. Sandy soil usually drains quickly and isn’t the best choice for an ash. Unsuitable soil can often be modified though; compensate for a lack of organic matter with a slow-release fertilizer, and lower the pH of alkaline loams with rock sulfur or peat moss. The ash is fast growing, so it demands a lot from the ground it’s planted in.

A mature ash has an extensive, deep root system that can tap into ground water very efficiently, but while it’s growing it’s often best to give it some help. If you can choose a location near water that’s always good – close to a pond or creek, or even in a swampy patch. Water thoroughly when first planted then weekly for the first six months or so, If you have a dry spell make sure the root zone doesn’t dry out too much. Consider putting down an organic mulch, such as pine needles or shredded bark, and keep it moist. Placing a soaker hose around the tree and turning it on for two hours a day is also an option. A dehydrated ash will show brown, brittle foliage; that’s a sign you need to water more.

Because the ash prefers wet ground, a two to four inch layer of mulch is often a good idea; it will help keep the soil over the roots cool, minimize evaporation of moisture and trap more water when it rains or you water the tree. A good organic mulch will also slowly release nutrients as it decomposes; these will trickle down into the soil and nourish the tree.

In organically rich soil it prefers the ash shouldn’t need fertilizer, but if the ground is poor a slow release fertilizer can help. Look for one that contains nitrogen, phosphorous, potassium and sulfur for the best results. Poor soil is often the cause of disappointing fall colors, and the right fertilizer can brighten your tree’s annual display.

An ash tree is a great choice for a permanent centerpiece in your garden; many species will live for hundreds of years and a mature specimen is very imposing – tall, broad and shapely. If you’re looking for a shade tree that generations of your family can sit under an ash is just what you’re looking for. They’re often planted as street trees in the USA for this reason. Ash trees also have an honored place in folklore and in manufacturing. Their wood is dense, springy and strong, and often used where extreme strength is requires – baseball and cricket bats, tool handles and bows have all been traditionally made from ash. Its leaves have also been used as fodder for cattle; if gathered in early fall they make a good food source through the winter.

More than 60 wild species of ash are known to exist and there are many more cultivars. These can vary in size, habits and climate tolerance, making the ash a very versatile tree – there’s almost certainly one that suits what you’re looking for. At The Tree Center we have a wide selection of ash trees; here are some favorites:

Native to China, the Tianshan Ash Tree is medium sized and will usually grow to at least 30 feet high and can reach 60 feet. It has attractive leaves, made up of an odd number of bright green slender leaflets. It’s one of the more drought-resistant ash species, so if you have the occasional dry spell this one could be a good choice.

As the largest native North American ash, the White Ash can sometimes reach or even exceed 80 feet in height. Its large leaves have a dark green upper surface and are greenish-white below; the tree’s name comes from this feature. It’s a very impressive tree that puts on a vivid red display every fall.

The ash has a long association with humans, both in mythology and as a raw material. It’s usually a large tree and its spreading crown makes it ideal for creating a patch of shade. If you’re looking for a windbreak, a line of ash trees will also fill this role very well. Its deep, powerful roots make it very wind resistant and it can soak up a lot of the weather’s force before it reaches your home. Of course it’s also worth planting just for its looks – an ash will really enhance your garden.

Unfortunately the ash is somewhat vulnerable to pests. The usual range of insects may infest it – aphids, leaf borers and so on – but there’s one threat specific to ash trees. The emerald ash borer is an insect which gets under the tree’s bark then tunnels into the wood. Once infested a tree usually dies within three to five years, and unless the pests are detected early it’s very hard to get rid of them in time to save it. The emerald ash borer is native to China but reached the USA through untreated shipping pallets in the 1990s; since then it’s killed millions of wild ash trees. The first cases were found in Michigan in 2002 but since then it’s spread to neighboring states and is likely to keep expanding its range. Asian ash species may be more resistant.