Blueberries are the second most popular and consumed fruit in America, beaten only by the strawberry. Not only are these beautiful looking fruits tasty, they are packed with antioxidants and other health-giving nutrients and they are one of the healthiest fruits you can eat. As topping for cereal, in muffins and pies, in drinks and fruit salads, blueberries are so very popular and useful in the kitchen, as well as being healthy, that it just makes sense to grow your own if you possibly can. If you grow your own you can enjoy the extra flavor that comes from picking them fully ripened, while commercial crops are picked before that point so that they can be shipped to stores. Even if you don’t use Blueberries in large quantities you will never have the problem of too many ready all at once, as Blueberries can just be popped straight into the freezer until they are needed.

Using Blueberry Bushes on Your Property 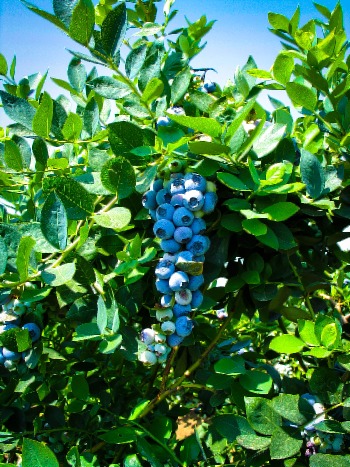 When deciding to grow blueberries the first thing that you have to consider is your soil. To grow Blueberry Bushes directly in the garden you need to have acid soil, with a pH range of 4.0 to 5.5. If you don’t already know your soil pH, then you can get a simple and cheap kit from most hardware or gardening stores to easily test it at home. You also need to see if your water supply is hard water and a simple kit will tell you that too. If you are in the right range, and you have soft water then you are all set and can go ahead and grow Blueberry Bushes in your garden. If you are very close to having the right soil and live in a warmer area, try the Rabbiteye Blueberry, which is less demanding with its soil needs.

If you don’t have the right soil that is not a reason to give up on growing Blueberry Bushes, as they will grow well in containers and pots. Some varieties, like Toro Blueberry and Sweetheart Blueberry, have been specially bred just for containers, so those should be your first choices, but other varieties will also grow in large pots. For water you can collect rain-water in a tub. Do not use water that has gone through a standard household water-softener as that contains a lot of salt (sodium) which is also bad for blueberries.

Blueberry Bushes are shrubs that vary in size from a foot or so to 10 or 12 feet in height. Most are around 4 or 5 feet tall, so they fit well into a collection of shrubs. They need a sunny spot that does not become dry and they are attractive enough to grow among your flowering plants. If you are a more serious fruit grower – or want to be – you can grow them in their own area in rows, like other fruit bushes.

Blueberry Bushes are part of the botanical group Vaccinium and several species are grown for their fruit. They all come from North America and different ones grow all the way from Canada to Florida. As well, plant scientists have made different hybrids so they are a mixed bunch. There are five main kinds of Blueberries.

Growers in warmer regions can also grow the Rabbiteye Blueberry (Vaccinium ashei) which comes from the southeast, growing from Texas to North Carolina and down into Florida. This is also one of the taller Blueberries and can easily reach 10 feet tall.

Lowbush Blueberries (Vaccinium angustifolium) grow just 1½ feet tall and are found growing naturally in the north-eastern states. Although there are garden varieties, these are mostly produced by harvesting wild plants, much as Cranberries are.

Finally there are hybrids between Highbush and Lowbush Blueberries, called Half-High Blueberries, which grow 3 to 4 feet tall.These are very winter hardy and excellent for container growing. The Sweetheart Blueberry is an example of this type and does indeed make an excellent container plant.

Blueberry bushes are shrubby and rounded, almost as wide as they are tall. The leaves are small, usually oval and are thick and glossy. Some varieties are evergreen and others lose their leaves in winter. The deciduous kinds often turn spectacular red colors in the fall. The flowers appear in spring and are small, white and bell-shaped. They are in clusters and develop into the berries, which begin green and gradually change to reddish-purple and then become deep purple when ripe. Most varieties are purple but a beautiful new variety – the Pink Lemonade Blueberry – has fruits that ripen to a delicious deep-pink color. The berry has a fine waxy coating – called the bloom, which protects it from drying out while it matures. Most bushes produce one crop of berries in the middle of summer, but the Sweetheart Blueberry can produce a smaller second crop in fall in warmer areas.

Blueberry Bushes like soil which is sandy or loamy and do not like clay very much.  They also like soil that is well-drained but gets plenty of water. As already mentioned, they must have acid soil. When preparing a bed the soil can be enriched with rich compost, but be careful that no lime has been added to it. Add plenty of peat-moss as well, during bed preparation and also during planting. For growing in pots you should use potting-soils designed for acid-loving plants like azalea and rhododendron.

If you are planting a collection of blueberries, space the plants 5 feet apart in rows 10 feet apart. Dig a hole twice the size of the pot and mix extra peat-moss into the soil you dig out. Place your plant in the hole and put back most of the soil, firming it down around the roots. Fill the hole with water and when it has drained away put back the rest of the soil. Mulch around the plant with bark mulch and replenish it as necessary throughout the life of your bushes. During the first year water your plants once or twice a week and do not let them become dry. Once established they will need water before the soil becomes too dry.

Blueberry bushes take a few years to reach a good size and produce large crops.  However they are long-lived and will produce crops for many years. They do not need any pruning for the first three years, as they establish themselves. After that, prune in late winter by removing any dead, crowded or weak stems. In six years start removing the oldest shoots at ground level or cut back to where strong shoots have grown out. After pruning is a good time to replenish that bark mulch too.

Fertilizer for plants growing in the ground is only needed if you notice that the growth is very slow, less than 1 foot a year, or 6 inches for smaller varieties. Use a natural fertilizer like cottonseed, alfalfa or soya-bean meal in early spring and apply ¼ cup when the plants are young, gradually increasing to a maximum of 2 cups for full-sized plants. Plants growing in containers should be fed monthly with a ¼ cup of cottonseed, alfalfa or soya-bean meal. Sprinkle this over the surface of the pot and the nutrients will flow into the soil every time you water your plants. Alternatively, container plants can be fed regularly with half-strength organic liquid fertilizers like fish emulsion.

Blueberries were an important food for Native Americans and early settlers soon started to use them too. Native Americans dried them and mixed them with corn meal to make a pudding called Sautauthig. This was adopted by the early settlers, who added sugar, milk and butter and probably invented the blueberry pancake that way! American blueberries are relatives of similar species from Europe and are related to whortleberries, bilberries and also to cranberries.

Today, Blueberry Bushes are very easy to grow as long as you have the right kind of soil or grow them in containers if you don’t. Because they are so popular they are a great choice for a fruit bush, as they have very few pest and diseases, need no special skills and can be fitted into the garden without even having a special area for them.