The hemlock tree you might plant in your garden isn’t the famously lethal poison hemlock – it’s one of several species that grow in North America or eastern Asia, and isn’t related to the toxic European variety at all. That’s good news for gardeners because it means you can have these attractive trees without worrying about safety. Botanists disagree about exactly how many species of hemlock there are but it’s somewhere between eight and ten; four of these are native to the USA. Hemlocks are members of the pine family, so they grow quite quickly; that makes them perfect if you want a tree that will reach a good size in just a few years.

Hemlocks are evergreen conifers with flat, needle-like leaves, making them perfect for year-round interest. They vary in form; the North American species tend to be conical, while the Asian ones often develop an interestingly irregular crown. Both have their fans among gardeners and whatever one you choose you’ll enjoy its distinctive appearance. Hemlocks have heavily textured bark that ranges from gray to reddish brown in color; the branches form flattened sprays that droop slightly at the tips. These trees produce small to medium sized cones which can be quite colorful in some species.

Depending on what hemlock you choose, it can grow into a very large tree – some of them can reach close to 200 feet high in the wild, and over 80 feet when cultivated – so it’s important to be sure exactly what you want. Plan how it’s going to fit into your garden layout as it grows, and try to visualize how it will look when it’s mature. A big hemlock is going to be a very dominant feature and you’ll need to account for that. Before deciding which hemlock is best for your garden make sure you have all the information you’ll need to make the right choice.

How to Buy Hemlock Trees

Growing a hemlock isn’t difficult, but you’ll get the best results if you purchase your tree from a reputable nursery like The Tree Center. By getting a tree that’s been well cared for during its early stages of growth you’ll reduce the risk of pests or disease, and benefit from generally better health. Consider what works best in your garden, choose the hemlock that suits your needs, then order it from the Tree Center.

How to Plant Hemlock Trees

Sun: If possible plant in part shade. Hemlocks are more tolerant of shade than most conifers but may suffer in strong direct sunlight.

Water: Water for 5 to 10 minutes immediately after planting, then every day for the first two weeks. Continue watering weekly for the next year; about an inch a week should be enough. Hemlocks don’t like drought conditions, especially when they’re young.

When to plant: The best time to plant a hemlock is in early spring, so it can get established in cooler weather. If necessary it can also be done successfully in early fall, but spring is the best time. Don’t plant in summer or after the end of October. 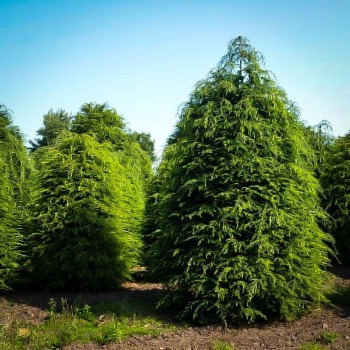 Pick a spot in your garden that meets the water and shade requirements for a hemlock, then order a suitable one from The Tree Center. When it arrives prepare a hole. Hemlocks have shallow, broad root systems, so your hole should be the same depth as the tree’s root ball and at least twice as wide. Before planting, mix the soil you dug out with organic material and, if the soil has a significant clay content, some sand to improve drainage. The ratio should be two parts soil to one part added material.

Position your hemlock vertically in the hole and loosen the roots. If any of them look damaged, prune them. Then fill in around the roots with the soil mix you prepared. When the hole is half full water it; this will help settle the soil around the roots. Let it drain, then fill in the rest of the way and press it down firmly. You’ll probably find that there’s still a raised area around the tree; this is fine. In fact if you have a Canadian Hemlock you may want to consider planting it above the surrounding ground.

It’s a good idea to stake hemlocks for the first two to three years, to ensure they grow straight. Once the stake is in place and the tree is fastened to it water again, then cover the filled-in hole with an organic mulch to help keep the roots cool and moist.

Hemlock will grow best in medium weight, organically rich soil that’s slightly acidic. If there isn’t much humus content you should definitely add some at the planting stage. Hemlocks, particularly Canadian Hemlock, can also be sensitive to any contaminants in the soil. Avoid planting near roads as the salt spray thrown off in winter will do them no good at all.

Good drainage is essential as waterlogged roots can easily kill the tree, so sandy or loamy soil is best, while clay should be avoided if possible. If you do plant in clay it’s vital to mix some sand in before backfilling the hole.

A final thing to be aware of is that, because hemlocks have shallow roots, they’re vulnerable to the wind. Plant in a sheltered spot if possible, especially if your soil is very loose.

With a hemlock it’s vital to get the water balance right. If the root zone dries out the tree will struggle badly and could easily die, but waterlogged soil is almost as bad. Excessive watering should definitely be avoided. If there’s a pond or creek on your property make sure to choose a location at least six feet away from it to keep the roots out of saturated ground. Because correct watering is so important, a soaker hose is usually the best solution; it delivers water slowly but predictably.

Fertilizer shouldn’t be required for a hemlock unless your soil is poor. If you add enough organic material when you plant it that should be enough to let it get well established. If there is an issue with nutrients, a slow release balanced fertilizer is the best choice. Using an organic mulch will also help, by leaching nutrients into the soil as it decomposes.

Mulch is a good idea for hemlocks anyway, especially when they’re young; it will help keep the roots cool and moist. Go for sawdust or shredded bark. If the soil is neutral or slightly alkaline the right organic mulch, mixed with a little rock sulfur, will help to lower the pH into the range your tree prefers.

The hemlock is a familiar sight in many American forests, and having one in your garden is a great way to create a tangible link between your property and the land that surrounds it. These trees have been cultivated for centuries, for their timber as well as their looks; even now, hemlock is often used for processed wood products. The bark has also been used for tanning leather. The needles can be infused in boiling water and used to make tea. Recently oil extracted from the black hemlock has even been used as the base for a perfume, which was instantly named as one of the 100 great classics.

The ten species of hemlock are generally similar, but there are enough differences between them that they can’t be seen as interchangeable. The best one for you will depend on your climate, soil conditions and the style of tree you’re looking for. Here are two examples of the choice on offer:

When cultivated the Canadian Hemlock usually grows to a height of around 60 feet, and has a classic narrow pyramidal form. It’s a long-lived and impressive tree and a natural choice for a centerpiece. However the more than 300 cultivars available also include some very interesting dwarf varieties such as “Betty Rose”.

A smaller hemlock that reaches between 30 and 40 feet, this species has an irregular shape and often spreads to up to twenty feet across. It has particularly attractive orange-brown bark, along with glossy dark green needles. This is also one of the most disease-resistant hemlocks.

A hemlock is a great choice if you’re looking for an evergreen tree that will thrive in shade. It’s also an important food source for many insects, particularly native moths. If you tend to get a lot of snow in winter look at hemlock before other conifers; they’re very well adapted for those conditions and much less likely to suffer broken branches from heavy buildup.

If you often get long dry spells in summer a hemlock may not be the ideal choice for you – they don’t tolerate drought conditions well at all. Their shallow roots also leave them vulnerable to being uprooted by high winds. However, the worst problem is the hemlock woolly adelgid, an Asian bug accidentally introduced in the 1920s. This has become a major problem in the southern part of the native hemlock range and is killing trees rapidly in parts of the Appalachians. If it’s found in your area planting a hemlock is a risk.